"India's smartphone users experience varying 4G download speeds depending on the city they live in. In this study, Navi Mumbai led our 20 cities’ ranking with double the speed of Allahabad, which came last. Hyderabad has the most consistent speeds and Allahabad the highest variance". "In all cities, 4G download speeds changed considerably at different hours of the day, being the average download speeds at 4.5 times faster at night".

The analysis stems from a resent exercise to measure 4G download speeds across 20 of India’s largest cities. Rizzato noted that smartphone users experience varying speeds depending on the city they live in: while Navi Mumbai scored 8.1 Mbps in average LTE download speed, Allahabad came last with an average of 4.0 Mbps – half the speed. 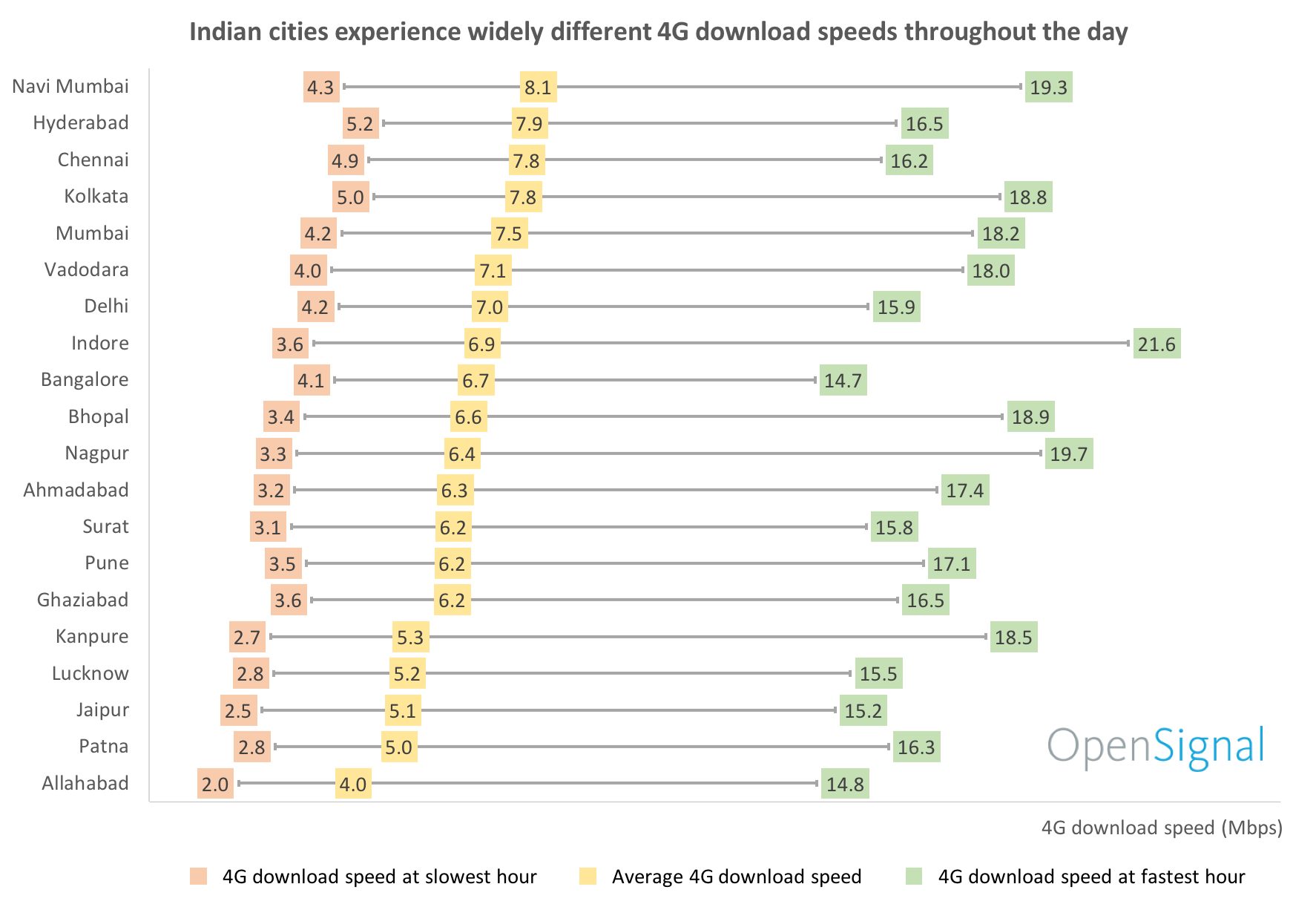 According to OpenSignal user experience vary widely across the hours of the day. The wide range between a city’s fastest hourly speed and the average speed smartphone users experience shows the challenge India’s operators face from the need to support a really big number of smartphone users consuming mobile data services.

When the mobile network is busiest, the average LTE download speed drops 2.8 Mbps compared to the daily average – with users in Allahabad experiencing the slowest 4G download speed at 2 Mbps. When the network is less congested, download speeds jump on average by 10.3 Mbps, with Indore hitting the highest speed of 21.6 Mbps and all of the 20 cities above 14 Mbps.

“By comparing each city’s average worst versus best hourly speed, we found that smartphone users can experience 4G download speeds three to seven times faster by connecting to the network at a different time – with Hyderabad having the most consistent speeds and Allahabad the highest variance,” said Rizzato.

OpenSignal’s results thus suggest that network congestion is one of the main reasons why smartphone users in India experience relatively slow average 4G download speeds. “We observed that Indian cities face different degrees of congestion and that users experience speeds over 20 Mbps at quiet times. But this only occurs in the middle of the night: in the daytime the large number of connected devices erodes the networks’ capacity and adversely affects everyone’s mobile network experience,” observed Rizzato.

Indian mobile operators have made huge steps forward in tackling the challenge to offer nationwide affordable connectivity to the world’s second most populated country. However, with increasing number of people accessing mobile services, cheaper smartphone devices, and rising average data consumption per user, India’s mobile operators can expect the number of connected devices and data traffic to continue soaring and the challenge of network congestion to persist.

As soon as the 4G availability race has been played out, operators will need to focus on continuing to increase network capacity to ensure all the connected smartphone users can get a more consistent download experience throughout the day across all of India.