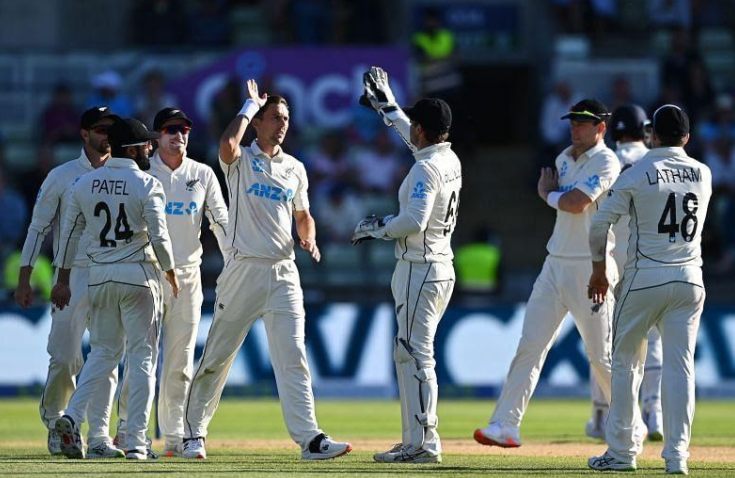 ​New Zealand pulled off a stunning performance at Edgbaston today to dismantle an England outfit that was fragile at best for most parts of the day. The Black Caps were far superior to their opponents and are only one wicket away from chasing down what should be a paltry total.

New Zealand carved out a lead of 85 runs as England were put in to bat in the second session. What followed was absolute annihilation as England’s batsmen crumbled against a relentless Kiwi attack. The Black Caps bossed the day and are should be able to claim the Test match tomorrow morning.

England were their own worst enemy in the morning session on day 3 as some poor work in the field handed New Zealand the initiative. Ross Taylor was given a reprieve by Sam Billings in the deep and was in no mood to cut the hosts any slack.

The Kiwi veteran unleashed a series of strokes before Olly Stone had the last laugh with the second new ball. Ross Taylor was the third New Zealand batsman to fall in the 80s in this match and departed after handing the Black Caps the advantage.

England improved as the session wore on, however, as Stuart Broad and Olly Stone bowled well in tandem to work their way back into the match. James Bracey had a torrid time behind the stumps, however, and dropped Tom Blundell to gift the Kiwis yet another lifeline.

New Zealand struggled against the discipline of Stuart Broad after lunch as the English bowlers found their mojo in an interesting session. Broad, Wood, and Anderson took turns picking the Kiwis’ lower-middle order apart and managed to halt New Zealand’s ominous advance.

The Black Caps added some precious runs to their total towards the end of the innings, however, with Trent Boult and Ajaz Patel riding their luck and scoring some fortuitous boundaries. England finally broke what was a frustrating partnership and had to play out 6 overs before tea.

Matt Henry was in no mood to let England off the hook, however, and sent Rory Burns packing with New Zealand’s second ball of the innings. Dominic Sibley departed soon after to leave England reeling at 18/2 as the players took tea.

The Test match would only go from bad to worse from England as New Zealand were in no mood to relent. Matt Henry and Neil Wagner took turns destroying the hosts and giving the likes of Ollie Pope and Joe Root a mountain to climb.

Neither Root nor Pope would survive the onslaught to come as New Zealand reduced England to 76/7 with nearly an hour left in the day’s play. England were on the verge of an innings defeat before Mark Wood and Olly Stone stepped up with their rearguard action.

England were able to wipe out the deficit before Neil Wagner switched back to his fiery bouncers and sent Mark Wood back to the pavilion. Trent Boult uprooted Broad’s stumps to leave the hosts reeling at the end of the day’s play.

New Zealand are in control after reducing England to 122/9, a lead of 37, in their second innings.