Global cellular IoT connections to cross 5b mark by 2025: Counterpoint

Global cellular IoT connections to cross 5b mark by 2025: Counterpoint

Global IoT cellular connections are expected to hit the 5 billion mark by 2025 and China will continue to lead by contributing nearly two-thirds of such connections, says Counterpoint Research.

According to the latest research from Counterpoint’s IoT (Internet of Things) service, global IoT cellular connection grew 72% in the first half of 2018, which the research firm described as “a considerable increase” as compared to the same period last year.

China at present is the world’s largest cellular IoT market, with the country’s three telcos – China Mobile, China Unicom and China Telecom – accounting for a combined 70% of the global IoT connections. In 2025, an estimated 66% of global IoT connections are expected coming from the trio’s IoT networks. 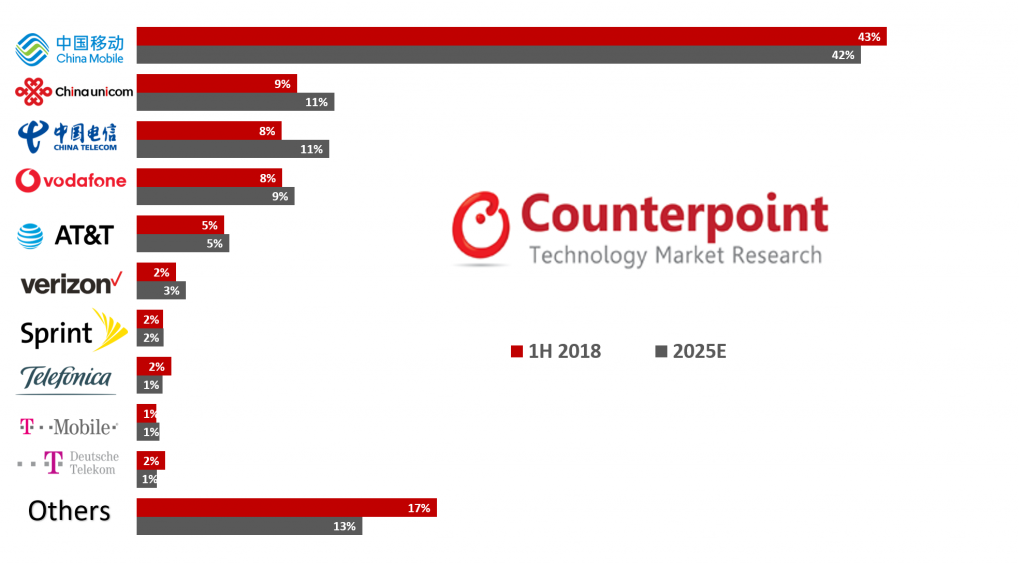 "Emerging markets like India, Brazil and Africa can offer tremendous scale but will likely be late followers compared to China in this path to connected everything," Counterpoint research analyst Satyajit Sinha said.

"However, the massive growth opportunity remains in terms of cellular-IoT connections in emerging markets which will be possibly catalyzed by operators such as Reliance Jio in India but more specifically from multi-market players such as Telefonica or MTN or Vodafone," Sinha noted.

According to Sinha, smart manufacturing, smart utilities and smart mobility applications - such as automotive and asset tracking - will be the key growth drivers for IoT adoption over the next five to seven years.

NB-IoT to be the dominant connectivity technology

On the technology side, the report predicts that narrowband IoT (NB-IoT) will dominate the market with 45% of global IoT cellular connections by 2025, due to the wide variety of application opportunities and faster adoption rates in the overall ecosystem.

2G IoT connections will occupy less than 1% of global IoT cellular connections by this time, as they are increasingly replaced by NB-IoT.

3G IoT connections face the same fate as 2G. However, 3G will go extinct much faster than 2G.

4G LTE IoT connections (high bandwidth & low latency) will grow at a much faster rate till 2022, due to global adoption of LTE Advanced and Advanced Pro.

At the same time, the increased popularity of NB-IoT and unlicensed LPWA will also take away the opportunity and share of LTE-M, which will have a presence until 2022 and contribute around 6% of global IoT cellular connections in 2025.

“Most of the IoT connections are still on 2G/2.5G networks,” Counterpoint research director Peter Richardson said. “However, the shift to 4G LTE and cellular-LPWAN is already in motion and we expect an ongoing shift to these newer technologies in 2H 2018 and 2019.”

While cellular-LPWAN brings a number of advantages over unlicensed LPWA solutions, Richardson added that there are a number of use cases where unlicensed technologies offer a superior mix of cost and functionality.

“Over the short to medium term, we expect co-existence and even the combined use of both licensed and unlicensed LPWA technologies,” he said.

As the industry is expected to smoothly transition from 4G LTE to 5G from 2020 onwards, 4G LTE IoT connections will hold slightly more than a third of global IoT cellular connections in 2025, Counterpoint said.

“5G will be crucial for some sectors, for example automotive, especially for V2V and V2X. The adoption of 5G cellular will depend on the availability, cost of modems from companies like Qualcomm and Huawei as well as coverage area. We expect 5G to account for around 10% of global IoT cellular connections in 2025,” Richardson concluded.