The Oxford dictionary defines a megatrend (some spell it as ‘mega trend’) as an important shift in the progress of society or a particular field or activity. The folks at EY refer to a megatrend as an event that will transform the human experience, reshape markets, societies and the global order.

Back in 2007 near the beginning of the smartphone era, mobile operators saw a small proportion of their subscribers consuming a disproportionately large proportion of data. At the time Analysys Mason noted that in Southeast Asia, about 5% of subscribers consumed as much as 30% of total network data, and yet only contributed 6.5% of revenue and a mere 1% of overall margins.

Times are changing in a big way

Analysys Mason’s partner for consulting Amrish Kacker predicts the next wave of data and data consumption is going to be a huge move in 2019. He refers to the obvious growth in data usage and smart phone usage in recent years. So what else is new?

“We are at an inflection point from an industry perspective on the revenue side. Broadly speaking in the last 2-3 years across Southeast Asia, operators have been struggling to grow revenue at a service level. And that’s primarily because growth in smartphone has seen voice and SMS revenue declining,” he says. “Even though data has been growing, it is not growing fast enough to substitute for the loss of revenue from voice and SMS.”

He now believes that Asia has reached an inflection point in the sense that the drop in revenue from voice and SMS cannot significantly go down any further. “There is only so much voice and SMS revenue that can be cannibalized and we have reached the stage where most of that cannibalization is done. What this means is that all the growth in data that you are going to get is going to drive growth in revenue and top line for operators,” he notes.

He believes that this realization is going to change the mindset of mobile operators and service providers. “Up until today they have been looking at a top line that is shrinking, and therefore, the corresponding reaction has been to execute strategies aimed at either not losing market share or cut cost,” observes Kacker.

He adds that if the base of SMS and voice revenue is not going to further drop significantly as compared to the last few years, the growth in data revenue will see innovation taking place as operators race to grow their data services business without the distraction that comes with persistent voice and SMS concerns.

For Kacker, this change in mindset presents an exciting period for the industry.

“If you couple this with the fact that the 4G networks and 4G smartphone penetration in most markets is now going to be very expensive, then we can expect innovative products and services come out to capture new revenue opportunities,” postulates Kacker.

This is what will make it interesting in 2019. He postulates that a megatrend will be the emergence of unlimited data - in ways not seen previously. Figure 1 shows mobile date allowances for post-paid subscribers in select countries in Asia. 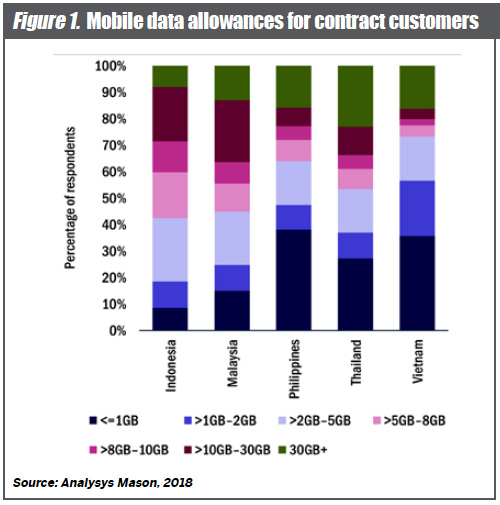