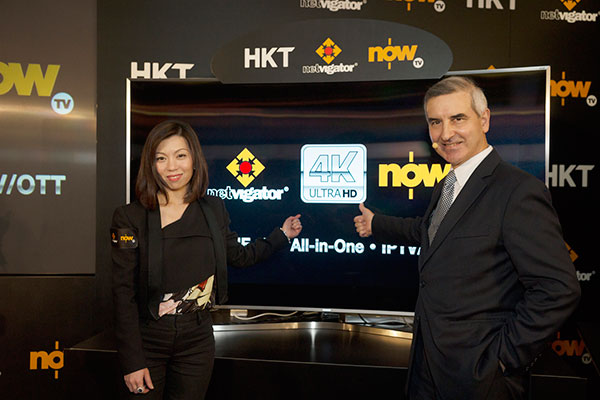 “In this respect we are working with Now TV to bring a true 4K UHD experience to our customers.”

The company will commence a pilot with selected Netvigator and Now TV from next month with commercial rollouts in the first quarter of 2016.

“We will be choosing customers [for the pilot] throughout Hong Kong because want to test the network and service thoroughly,” Arena said.

“We want to reach the market until we actually test it properly so that it's the experience that customers expected.”

According to Arena, HKT’s FTTH service reached over 573,000 homes, while FTTB reached 87.1% households in Hong Kong in June. The company plans to extend the FTTB coverage to the remaining 13% in rural areas, islands, remote and isolated areas by year-end.

He declined to disclose the tariff of the new service, but said the service will be provided at an affordable price level.

Janice Lee, the managing director at PCCW Media, said customers of the 4K service will be given a new all-in-one appliance which supports UHD, IPTV, DTT, OTT and DVR.

She said the company, which had 1.2 million IPTV subscribers as of June, is seeking for more relationships with content partners especially in terms of provisioning of 4K content, the amount of which is just started to increase.

In a separate announcement, HKT’s international arm PCCW Global said it has launched a new internet-based video-on-demand (VOD) entertainment service in South Africa. The service, called ONTAPtv.com, is available with immediate effect via its website and using free Android and iOS apps.

App visualizes radio signals all around us

TeliaSonera is exiting Eurasia at a good time

The regional economy is slowing, and staying put may tarnish the telco's image

TeliaSonera is exiting Eurasia at a good time

The regional economy is slowing, and staying put may tarnish the telco's image

Cellcos must change the perception of who they are

Price competition in Myanmar may be unsustainable