Dianne Northfield and Phil Marshall/Tolaga Resarch
12 Apr 2013
00:00
Prospects for the commercial launch of LTE services in China are boosted by plans by the Ministry of Industry and Information Technology (MIIT) to release spectrum for LTE across both paired FDD and unpaired TDD bands.
In October 2012 the Ministry announced that the entire 190 MHz in the 2600 MHz spectrum band would be allocated for TDD service provision.
More recently the regulator has marked 120 MHz of FDD spectrum for LTE, 60 MHz in the 1800-MHz band and 60 MHz at 2100-MHz. Use of spectrum in the 1.4-GHz range (1427 to 1515-MHz, 98 MHz TDD) is also under consideration for allocation for LTE.
While a level of uncertainty remains, statements from the MIIT suggest that new spectrum for LTE may be allocated in the Q3 2013 timeframe. The current spectrum holdings of operators in China are shown in Exhibit 1 along with details of proposed new allocations.
Exhibit 1: Radio Spectrum Allocations in China
Source: MIIT, Tolaga Radio Spectrum Intelligence, 2013 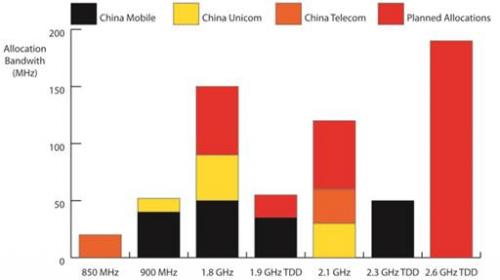 China Mobile was allocated 2300-MHz spectrum in 2009 for use with its TDD SCDMA network. It has been trialing LTE using trial licenses with spectrum in both the 2300-MHz band (with use restricted to indoor provision) and 2500-MHz TDD (2570 to 2620-MHz).
According to the operator, “currently we are carrying out the trials using 1880 to 1900-MHz and 2575 to 2615-MHz spectrum outdoor and 2320 to 2370-MHz spectrum indoor. TD-LTE system can provide higher than 20Mbps/100Mbps uplink and downlink peak rate.” The entire 2300-MHz band is restricted to indoor usage in China and the MIIT has not indicated that this restriction will be lifted.
As China Mobile continues its extensive trial and deployment activities, the operator has outlined plans to cover 100 cities with 200,000 LTE base stations in 2013, to achieve population coverage of 500 million people. The scale of the China Mobile’s deployment and its use of TD-LTE are driving global interest in TDD spectrum and ecosystems for TD-LTE capable equipment.
China Unicom and China Telecom are both expected to initially launch their LTE services using their existing FDD spectrum holdings in the 2100 MHz band. With the pending allocation of new spectrum these operators will potentially also access TDD spectrum that can also be used for LTE. China Mobile has also announced plans to launch LTE services also using FDD spectrum, which is the path that its subsidiary in Hong Kong is treading.