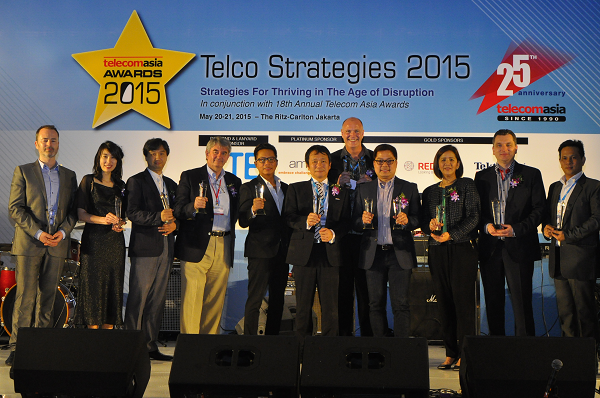 JAKARTA, May 20, 2015 – NTT Communications and Smart Communications were the top winners with three awards each at Telecom Asia’s 18th annual awards ceremony. But Telstra scooped the top award of the night when it was named the 2015 Asia Carrier of the Year.

Telstra – which was tied with Smart for the most nominations this year at seven apiece – earned the most points from the judging panel to win Asia Carrier of the Year, thanks to its strong financial performance, service innovation and visionary leadership. Telstra also picked up the Best Mobile Carrier award for the fourth year running.

Smart CEO Napoleon Nazareno won the prestigious Telecom CEO of the Year award – his second, after winning the award in 2012 – while Smart also took home awards for Most Advanced Approach to Customer Experience, and Most Innovative Partnership via its mobile money tie-up with Landbank.

A total of 16 awards were presented to 11 winners at a gala dinner in Jakarta Wednesday night. The awards were held in conjunction with Telecom Asia’s 6th Telco Strategies conference.

Ooredoo Myanmar became the first Myanmar operator to win a TA Award for its MayMay initiative, which was lauded as Best Community Telecom Project.

The first Most Advanced Approach to Analytics award went to SingTel for its VAaaS (video analytics-as-a-service) initiative. And KT’s innovative Olleh TV Mobile service – based on LTE Broadcast (a.k.a. eMBMS) technology – was named Most Innovative Video Service Project.

Now in its 18th year, the Telecom Asia Awards are the region’s longest-running and most prestigious telecom industry awards. They reward innovative and outstanding performance by Asian service providers and industry executives.

The Telecom Asia Awards selection is made by an independent panel of industry experts who cast votes on the basis of innovation, financial performance, technology, market leadership and corporate governance.

The judging is conducted over two rounds, and the methodology varies slightly between segments. In the first round, the 13 judges nominate their best performers in each of 16 categories – except for International Wholesale, Managed Services Provider and Data Center Provider, where the candidates are asked to submit nominations. Readers were also invited to submit nominations online for eight of the 16 categories.

In the second round, the judges cast their votes on the shortlist of finalists, which is determined by Telecom Asia editors based on all the nominations from both the judging panel and self-nominations in a number of categories. The Best Asian Telecom Carrier award goes to the company with the most top-place rankings and overall number of votes from the judges.

The nomination process starts in early January and voting is finalized in April.

About Telecom Asia
Telecom Asia is Asia's largest regional telecom publishing group. Its products include Telecom Asia magazine, www.telecomasia.net and a range of industry-specific supplements aimed at telecommunications professionals around the region.