Lorenzo Sonego vs Rafael Nadal Wimbledon 2022: How and where to watch online for free, 2 July

The pace at which Wimbledon is ticking on is phenomenal and now we have reached the Third Round which means we are inching closer to the title game. We have seen some incredible upsets but mostly, the high-ranked players have gotten it done and we are in more fun from here on. On the second day of the Third Round, Lorenzo Sonego will clash against Rafael Nadal on 2 July at @06:00 PM (+03:00 UTC). Rafael enters the game after defeating Ricardas Berankis 6-4, 6-4, 4-6, 6-3. On the other hand, Lorenzo Sonego defeated Hugo Gaston 7-6, 6-4, 6-4 in the last match. Can Sonego stall Nadal’s progress?

How to Watch Lorenzo Sonego vs Rafael Nadal?

BBC once again has taken the mantle of broadcasting the Wimbledon Games for viewers in the United Kingdom. Viewers in the USA can watch this tournament on ESPN. EuroSport is going to be the main broadcaster in European nations. For the viewers in the Indian subcontinent, Star Sports has also broadcasted the game. For those who want to catch the game online, Hotstar is the way for Indian subcontinent viewers while Fubo, Sling TV, and Hulu TV are acting as the international streaming platforms. 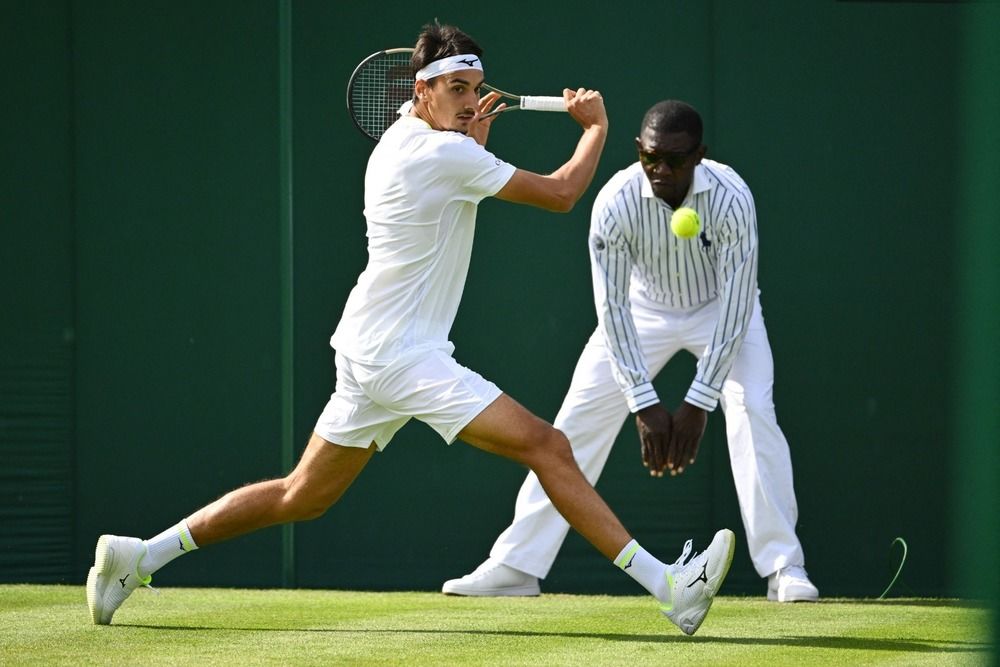 Lorenzo comes into this game after defeating Hugo Gaston 7-6, 6-4, 6-4. In that game, Sonego didn’t commit a single double-fault. He had a first serve win% of 77. He also earned 3/13 breakpoints which enabled him to get a 49-27 receiving points advantage. On the other hand, he did lose service points 67:72 but he was able to pull through with earning a ton of receiving points and now committing continuous errors.

Sonego had a much closer game in the first round when USA’s Denis Kudla pushed him to five sets in a game where Lorenzo had a better service game than he had against Hugo Gaston. He entered the tournament as the 27th seeded player and has been mostly a 21-30 ranked player for his career, especially since last year. In his last two Grand Slams, i.e. the French Open and Australian Open, he managed to reach the 3 Round too but lost there. Last year, he reached the fourth round of Wimbledon, can he at least reach there?

Rafael Nadal: He expects more from himself

The “King of Clay” Rafael is no less a threat on the grass and he has showcased this in the tournament. He comes into this game after defeating Ricardas Berankis. He took care of business in a one-sided manner in the first two sets, winning 6-4, 6-4. However, then Ricardas broke Nadal’s serve and also won the set 6-3, but Nadal ended up nabbing the last set 6-4. Rafael has been impressive through the first two games and he is set for a deep run it seems.

Despite two wins in total eight sets, Nadal wasn’t happy with his game in the match-up against Ricardas. He claimed that his service game was off and he wasn’t where he wanted to be. In fact, he didn’t look content even after winning and something was bothering him. He did laud his fourth set effort, but in the overall scheme, Rafa has wanted more out of himself in the last two games. Perhaps he wants a three-set win before he gets deeper.

Who will win the match between Lorenzo Sonego and Rafael Nadal?

Will Lorenzo allow Rafa to go deep? This is the stage where Lorenzo is often undone and this is the stage where Rafael unleashes his full-fledged game. Can Lorenzo take the fight to Rafael who has looked a tad susceptible so far or will Rafa be too good for the Italian? Interestingly this will be the first time that Lorenzo and Rafael are going to meet each other. Can Lorenzo script an upset?

Unsurprisingly, Rafa has an overwhelming edge over Lorenzo and has the odds of 1.205 in his favor as per bookmakers at 1xbet. Sonego enters with tricky odds of 5.35, can he overcome them?

Will this be another four-set affair for Rafa or will he dust it off quickly? Will Lorenzo make sure that this is a long game or does he have some ambitious plan himself? Will we see an upset? Still, how long will the match go on? I think there will at least be four sets and the games will be “Over” 34.5 which has the odds of 1.92.