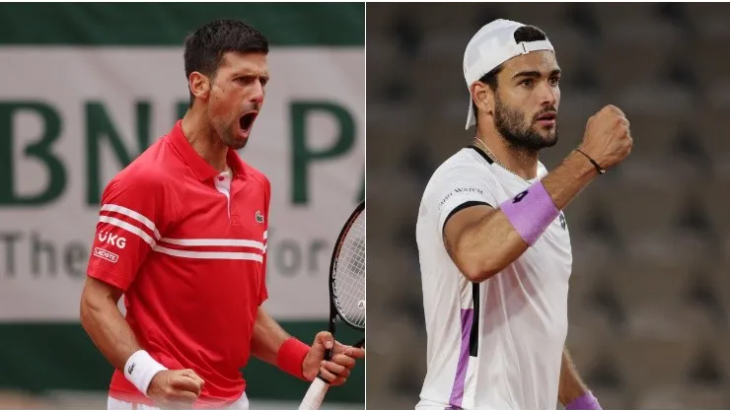 One month after their Roland Garros quarter-final clash, Djokovic and Berrettini are still against each other, this time in the most important stage: the final. One of them will take the Wimbledon trophy, which will be very important for both of them. For Berrettini, it can be the moment to write his name on the history of Wimbledon winners for the first time. Meanwhile, Djokovic seeks to write his name in the book of records, joining Nadal and Federer at the top of the list with 20 Grand Slams. It will not be easy, seeing that the Italian has had a fantastic tournament so far on his own. But Djokovic has shown great form too. After winning the Roland Garros, Djokovic came to this final after six wins. Draper (3-1), Anderson (3-0), Kudla (3-0), Garin (3-0), Fucsovics (3-0), and Shapovalov (3-0) were the opponents of the #1 of ATP ranking. Berrettini, on the other hand, defeated Pella (3-1), Van De Zandschulp (3-0), Bedene (3-0), Ivashka (3-0), Auger Aliassime (3-1), and Hurkacz (3-1) to reach his first Wimbledon final. Berrettini counts 17 victories in his last 19 games on a grass court, and since day 1 of this tournament, he has been of the top contenders to win this Grand Slam. Berrettini has shown offensive gameplay during this tournament, but will he manage the fury of the Serb? Don't miss this super final of Wimbledon 2021. You can watch Livestream at beIN Sport, Eurosport 2, Sky Sport, TV2, or betting platforms like bet365, 1xBet, and William Hill.

Two previous matches between the Italian and the Serbian so far. The first duel in November 2019 for ATP singles London saw Djokovic winning 2-0 (6-2, 6-1). The second duel was in June 2021 for the French Open ATP quarter-finals, where the Serbian managed to win again 3-1 (6-3, 6-2, 6(5)-7, 7-5). 2 wins for Djokovic and not a win yet for the Italian, who hopes to win this time. But reaching Nadal and Federer at the top of Grand Slams will be a big motivation for Djokovic.

The game will be tough. But the big favorite for this match is Djokovic, as the current number 1 in the ATP ranking. The motivation and powerful serves from the Serbian might be decisive at this tournament stage. Berrettini hasn't played yet with an opponent with a better ranking than him, and this duel will show his true power. A possible win of Novak Djokovic has 1.20 odds and Berrettini to win 4.80. Even though Djokovic has dropped only one set in this tournament (against Jack Draper in the opener), we predict that Djokovic will win in four sets this time.