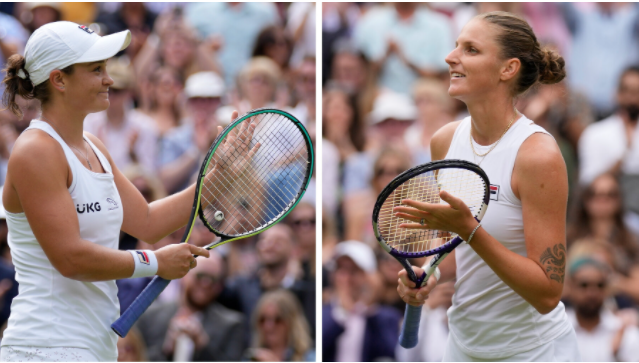 The final of Wimbledon 2021 WTA is just a few hours away, and we couldn't be more excited about it. A new name will be written in the history of Wimbledon WTA winners seeing that neither Pliskova nor Barty has won this competition before. The current #1 on the Women's ranking, Barty takes on #13 Pliskova in a final duel for Wimbledon 2021 trophy. Six wins for each to reach this grand final, and both of them have only lost one game in all the six matches. Pliskova lost that game versus #4 in the rankings Sabalenka meanwhile, Barty lost it versus Suarez Navarro. In all the other matches, they managed to win 2-0. Suarez Navarro, Blinkova, Siniakova, Grejcikova, Tomljanovic, and Kerber are the opponents that Barty had to put down to secure this final. On the other hand Zidasenk, Vekic, Martincova, Samsonova, Golubic and Sabalenka were defeated by Pliskova. A fully deserved Final for both players, who showed strength and determination in this competition. The road to glory now has only one obstacle left. But who will pass it? We are going to wait and see. It will be a challenging and beautiful game, so don't miss Wimbledon 2021, WTA Final. Barty - Pliskova.

There are seven previous matches between them from 2012 to April 2021. Pliskova has only two wins in 2016 and 2018. Barty has got the best out of them in 5 cases and is unbeaten in the last three matches versus Pliskova. In a grass court, both players have won only once against each other. In 2012 Barty eliminated Pliskova (2-1) in the semi-finals of ITF WOMEN - SINGLES: Nottingham 2. Later on, in 2016, Pliskova took revenge on Barty by winning 2-0 in WTA - SINGLES: Nottingham (United Kingdom). This will be the third time they will face on a grass court, and we can't wait to learn the winner's name.

Where to watch and predictions:

The game will be tough. Determination and patience will be the secret key to win this match. But who will manage to maintain the balance of both?

The big favorite for this match is Barty, as she is the current number 1 in the WTA ranking. But watch out from Pliskova as she will make it impossible herself to clinch that title. As for Livestream, you can watch the game at beIN Sport, Eurosport 2, Sky Sport, TV2. You can watch this match even on betting platforms like bet365, Williamhill, 1xbet, or Bwin. The odds for this match are: Pliskova to win 3.00 and Barty to win 1.40