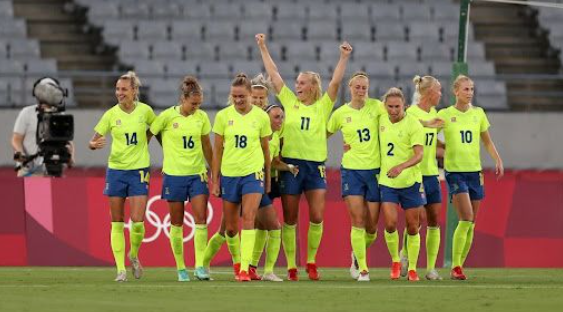 After finishing in first place in Group G and being the only team to complete the group phase with three wins, Sweden plays this Friday against Japan. A fantastic performance for them in the group stage, as they won in the opener against the #1 contender (USA) 3-0. In the second round, they continued the series of victories by beating Australia 4-2. Even though the result was 1-2 for 51 minutes, Swedish women managed to make an excellent comeback. In the last group match, Sweden encountered New Zealand (the weakest team in the group). The goals scored by Anvegard and Janogy were enough to give a 2-0 win to Blågult. On the other side, the hosts - Japan came to the quarter-finals after being ranked 3rd in group E. Together with Australia, they were qualified as the best 3rd ranked teams (Zambia with 1 point not qualified). Even though they lost their first match against Great Britain 1-0, a draw against Canada (1-1) and a win against Chile (1-0) in the last match was enough for them to pass in the next phase. Only two goals scored for them in three games makes Japan the second team to score the fewest goals (Chile 1 goal scored) so far in this tournament. However, Japan have scored in the 2nd half in 6 of the last 7 Olympic Games Women games and will seek to get the best out of this match tomorrow.

Since 1991, Sweden has encountered Japan 10 times. The history talks in favor of Japanese women as they won five games drew two and lost three. Last time both teams faced each other was in 2016, in a friendly match where Sweden won 3-0. But will they do the same this time?

Both teams seem to be in top form for tomorrow’s match. No injuries or suspended players so far. The only player who was in doubt was Magdalena Eriksson (Sweden) that has recovered from her injury and will lead Sweden's defensive line this week.

Sweden has started the Olympics in the 5th gear, while Japan has done a minimal job to pass the group stage. However, Japan has shown that in head-to-head games against Sweden, they are much stronger than they. Playing at home, although without fans, may be a slight advantage for Japan. But Sweden will try to take advantage of the excellent form in which they are going lately. It will not be an easy game for both teams, but the recent form will be decisive in this match. For this, Sweden, in our opinion, will be the favorite team to go through. They have 1.57 odds to win this game within 90 minutes, and qualify odds are 1.33. Meanwhile, Japan to pass through has 3.25 odds and to win within 90 minutes 6.50 odds. You can also watch the match on Discovery + channel and check the odds on betting sites like Bet365, William Hill, 1xBet.