Phoenix Mercury has found the magic after an average start to the season as their win streak hit seven. Skylar Diggins Smith led the way for the Mercury as they swept aside Chicago Sky by twenty points after Phoenix crossed the 100 points mark. After winning the Western Conference Player honours, Skyla poured another sizzling performance with 20 points and 10 assists as Nurse hit 17 points, Griner pounced upon 18 points and Taurasi stacked up 17 points in another commanding win as Candace Parker couldn’t muster up more than two points for Chicago. Mercury is now 16-10 and Sky is at 13-12.

On the other hand, Washington Mystics got totally outmatched by the number one team in the League in Connecticut Sun as Jonquel Jones piled up 31 points and 14 rebounds, dominating from the paint, mid-range, and beyond the arc. For Sun, Brionna Jones continued her terrific touch and finished with 22 points and 10 rebounds, notching a double-double. Connecticut has now won nine games in a row and seems to have the strongest frontline in the Association. In other match-ups, New York Liberty brought out their feisty game playing toe-to-toe with the Minnesota Lynx. With around one and a half minute left, Sabrina Ionescue hit a three to cut the Lynx’s advantage to three, but Bridget Carleton replied with a three of her own to put away the Liberty. Meanwhile Indiana Fever won a late-game thriller against Los Angeles Sparks as Kelsey Mitchell hit a tough three late in the game getting to 25 points in the two-point win. 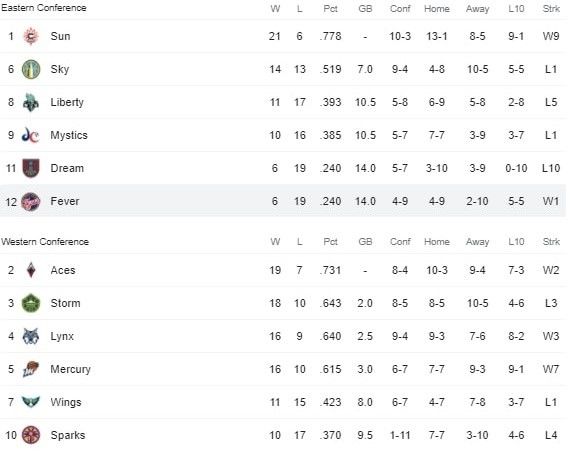 WNBA standings
Tags:
Rating:
0
Comments
No Comments Yet! Be the first to share what you think!