Content
To top
1.
Germany vs England: the Germans are Likely to Win
2.
Lithuania vs Turkey: the Turks to Get a Сomfortable Victory
3.
Faroe Islands vs Luxembourg: Another Defeat for the Hosts
Users' Choice
81 200 USD 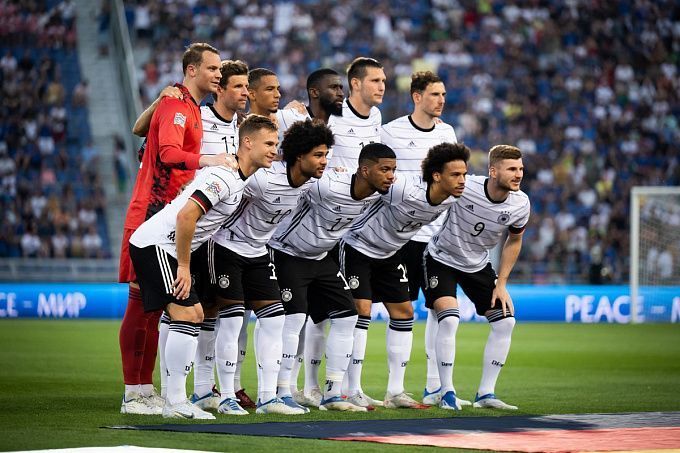 Accumulator tip for the League of Nations matches, which will take place on June 7. Who will be stronger? Check the teams’ conditions and expert betting tips. Several betting options are available!

Germany vs England: the Germans are Likely to Win

Germany got off to a good start in the Nations League as they drew with Italy (1:1). Their series without defeat counts ten matches - the last was at Euro 2020 just from England (0:2).

England's start in the League of Nations has been frankly awful. They managed to lose to the Hungarians with a score of 0:1. Yes, on the road, but dealing with such a relatively modest team was necessary. Before that, the last defeat England suffered in the Euro 2020 final from Italy on penalties.

We offer to bet on the national team of Germany. They were much better than the English in the first round of the League of Nations and probably had a serious attitude toward the second one. Plus, they will have the support in Munich and the desire to revenge on the English for the last 16 of the European Championship.

Lithuania vs Turkey: the Turks to Get a Сomfortable Victory

Lithuania, as expected, had a poor start in the League of Nations. Even with Luxembourg, the Lithuanians did not succeed - on their field, they lost with a score of 0:2. Lithuania has only one victory in the last six meetings - over San Marino, and that with a score of 2:1.

Turkey got off to a great start in the League of Nations. The team destroyed the Faroe Islands, smashing them with a score of 4:0. Before that game, the Turks had lost to Portugal (1:3) in the semifinals of the World Cup 2022 tie and a friendly to Italy (2:3).

We think Turkey will have no problems with Lithuania. They got an extremely confident win over the Faroe Islands, and they also intend to get back into the B-League of Nations.

Faroe Islands vs Luxembourg: Another Defeat for the Hosts

The Faroe Islands did not surprise anyone in the first round of the League of Nations - a devastating loss to Turkey with a score of 0:4. But before that, the team had even managed to get a rare victory in a friendly match - beating Liechtenstein (1:0).

Luxembourg, meanwhile, elegantly started the Nations League. A relatively modest team managed to beat Lithuania 2:0 on the road. It should be noted that earlier in eight matches, the Luxembourgers had only one victory.

As for the betting, here we propose Luxembourg. After the success in Lithuania, this team is sure to be enthusiastic and will try to get a second victory in a row.