Content
To top
1.
Portugal vs Spain: the Showdown to Live Up to Expectations
2.
Switzerland vs Czech Republic: Another Defeat for the Czechs
3.
Albania vs Iceland: the Icelanders to Keep Going Undefeated
Users' Choice
1632 200 USD 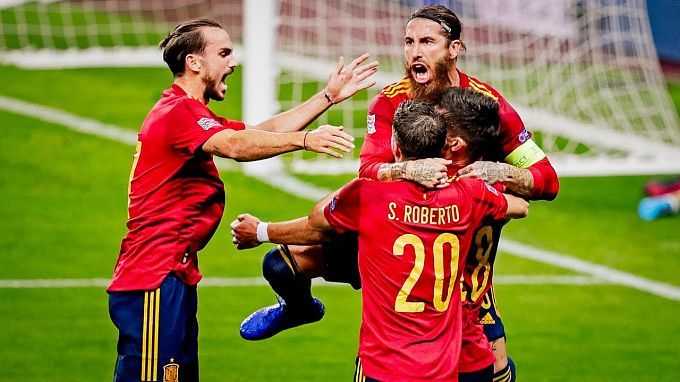 Accumulator tip for the spectacular Nations League matches, which will take place on September 27. Who will be stronger? Check the teams’ conditions and expert betting tips. Several betting options are available!

Portugal vs Spain: the Showdown to Live Up to Expectations

Portugal has performed well in this League of Nations. They have three wins, one draw, and one loss in five rounds. The Spanish team also looks excellent - two victories, two draws, and one defeat. Group 2 standings are as follows: the Portuguese lead with ten points, and the Spaniards are second with eight. Thus, the hosts just need to avoid a loss to reach the playoffs, while the guests should only win.

We suggest staying away from the outcome and betting on goals. The opponents rarely leave the field without shots, and now they have a playoff berth in the Nations League. Once someone opens the scoring, their opponent will have no choice but to go all in on the offense.

Switzerland vs Czech Republic: Another Defeat for the Czechs

Switzerland has only two wins in five games in the Nations League. First, they had a series of three defeats in a row, but they got two wins in the last two meetings. But the Czech national team started with a victory and a draw but then began a black streak - three defeats. The Swiss are in third place in Group 2 with six points, while the Czechs are fourth with four. Thus, to keep their spot in Liga A, the hosts need at least not to lose, while the visitors must win.

As for betting on the upcoming game, we choose Switzerland. The home team won two victories in the last two games, but the visitors failed three times. Now the Swiss are in the best conditions; they will be pretty happy with a draw.

Albania vs Iceland: the Icelanders to Keep Going Undefeated

Albania lost twice to Israel in the Nations League, while the Icelandic team twice played with the Israelis in a 2:2 draw. A face-to-face meeting of these opponents ended in a draw (1:1). In Group 2, the Icelanders are second with three points, while the Albanians are third with one. However, no one is in danger of relegation - Russia was disqualified from the tournament and automatically became the fourth.

For some reason, bookmakers believe that the Albanian national team will beat Iceland. But we do not think so - the visitors performed even better than the hosts in this League without giving any match. They hardly intend to interrupt the series, and their opponent is not the top one.