Content
To top
1.
Southampton vs Tottenham: They Trade Goals
2.
Watford vs West Ham: Will the Visiting Team beat an Outsider?
3.
Leicester vs Liverpool: Abundance of Goals
Users' Choice
12 200 USD

EPL is Replete with Goals: Accumulator Tip for December 28 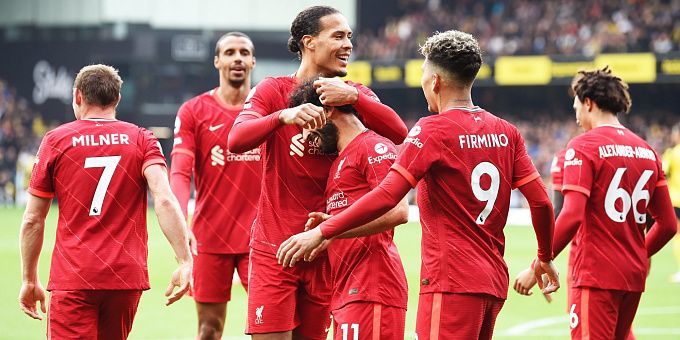 Prediction for the English Premier League matches, which will take place on December 28. Check the teams’ conditions and expert betting tips. Several betting options are available!

Southampton vs Tottenham: They Trade Goals

Southampton impresses the fans with their playing. In the last five home games, the club has never lost and scored at least one goal in each. The hosts cannot boast of their tournament placing – 14th position nine points from the danger zone.

Tottenham have got up steam in the Premier League. Spurs have not lost in the championship for the six rounds, hitting the opponents’ goal 14 times. Thus, the club climbed into the Europa League zone, ahead of West Ham by one point.

Southampton is not bad at home, but Tottenham is in great form. As we mentioned, the hosts have scored in every home match out of the last five, but we don’t think they will earn three points. In general, we suggest betting on an exchange of goals.

Watford vs West Ham: Will the Visiting Team beat an Outsider?

Watford is considered an outsider of the Premier League. The Hornets are fighting for survival, only two points ahead of the red zone. At the same time, the club shows pretty good offensive playing. At first, Watford scored as many as four goals in a game with Manchester United, then two - Leicester and one for the leaders of the Premier League - Manchester City and Chelsea.

West Ham is slowly sliding down. Tottenham took away the fifth position in the Premier League from the Hammers. In addition, they secured an entry to the semi-finals of the English League Cup. After that, West Ham lost embarrassingly to Southampton with a score of 2:3. Does it seem that bad luck follows the visiting teams?

Watford will fight back against the Hammers, especially since they are not in the best form. West Ham needs to end their defeated streak and regain their place in the European Cup zone. Also, note that opponents reached the total over in the previous three head-to-head games. In general, we are waiting for at least three goals.

Leicester vs Liverpool: Abundance of Goals

Leicester grew a spine in the last match against Manchester City. Unfortunately, it was impossible to earn points, but scoring three goals for such a powerful team is already a success. The game’s result was the defeat of the Foxes with a score of as much as 3:6.

If Liverpool loses points in the upcoming match, it will be challenging to catch up with Pep Guardiola’s wards. At the moment, the difference between the competitors is six points. In the last round, the Reds lost points, having played Tottenham in a draw (2:2).

On December 22, the opponents met in the quarterfinals of the English League Cup, and the match was fascinating. Liverpool lost with a score of 2:3, and only at 90 mins was able to convert the game into a penalty shootout, where it won (3:3, penalty shootout 5:3). We are waiting for an equally effective outcome.