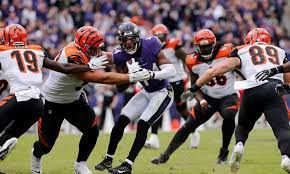 John Harbaugh and the Baltimore Ravens lost a heartbreaker last weekend against the Green Bay Packers. Baltimore has now put itself in a must-win situation against the Bengals on Sunday. The Ravens have struggled on the road this season but the Bengals haven’t played their best football at home.

On Sunday, the Baltimore Ravens could be without its starting quarterback Lamar Jackson against the Bengals. Jackson didn’t practice on Wednesday, and Baltimore was without Lamar Jackson last weekend. Lamar Jackson must play if the Ravens want to take over first place in the AFC North.

The Cincinnati Bengals received great news when Joe Burrow and Joe Mixon both fully participated in practice. Mixon has been battling an ankle injury, and Burrow is battling a right finger injury. With both practicing Wednesday, the Bengals will likely be at full strength.