Content
To top
1.
Super Bowl is held home for one of the teams again
2.
Are the Rams favorites? Bookmakers' odds on the Super Bowl LVI
3.
How the Bengals and Rams reached the finals
4.
Head-to-head encounters
5.
Expert Betting Tips
6.
Betting options
Users' Choice
12 200 USD

Cincinnati Bengals vs Los Angeles Rams: Rams to confirm their status as a favorite 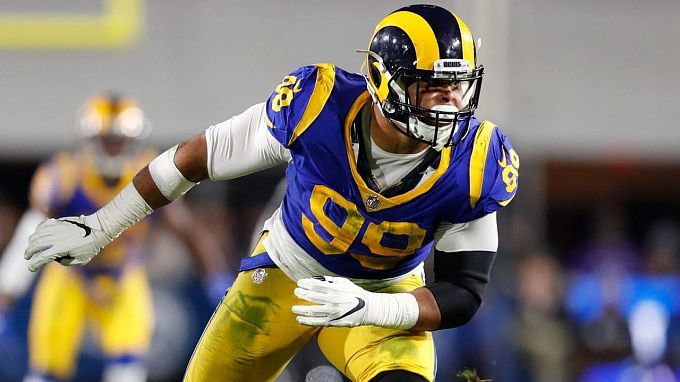 Super Bowl LVI, the final game of the NFL season, will take place in Los Angeles. The Los Angeles Rams will host the Cincinnati Bengals at their home SoFi Stadium. Will the home advantage help the Rams? Let's choose a few bets on the main event in US sports.

Super Bowl is held home for one of the teams again

Prior to Super Bowl LV, there had never been a single time in Super Bowl history when one of the teams participating in the final match had it at their own stadium. But that tradition was broken by Tom Brady and the Tampa Bay Buccaneers, who eventually outscored the Kansas City Chiefs 31-9 at Raymond James Stadium.

Super Bowl LVI seems to be starting a new tradition. For the second year in a row, one team is hosting finals. Now it's the Los Angeles Rams. Will the Rams, like Tampa Bay, succeed on the home field? Their opponents, the Cincinnati Bengals, are unlikely to agree. Especially since the Rams already took the Super Bowl in 2000, while Cincinnati have yet to earn it. The Bengals reached the finals twice in the 1980s, but lost both times to San Francisco. The Rams, on the other hand, last made it to the season opener three years ago – Sean McVay's team lost to the New England Patriots in 2019.

Are the Rams favorites? Bookmakers' odds on the Super Bowl LVI

The Rams are not just a favorite, they are the clear favorite. Not only do the Californians play at home, but they have been very confident all season long and they beat Tom Brady himself in the conference semi-final, 30-27. After that game, the legendary quarterback announced his retirement and the Rams made it to the Super Bowl after beating San Francisco in the NFC Finals. 1xbet offers odds of 1.48 on the Los Angeles Rams to win the match, while Cincinnati’s victory is estimated at 2.94. The odds on Handicap Los Angeles (-4) are 1.832.

The main Total offered by the same bookmaker is 49. The Rams' quarterback Matthew Stafford, 34, who threw only 1 interception in 3 playoff games, will face a much-improved Cincinnati defense. The Bengals are averaging less than 20 passing points per game this playoffs. At the same time, the Cincinnati offense, led by quarterback Joe Burrow, the No. 1 pick of the 2020 draft, will try to tackle the Rams' defensive tackle Aaron Donald, menace of all playmakers. One of the NFL's best defensive players has 12.5 sacks this season, including 1.5 in playoff games.

As far as receivers' totals are concerned, Cooper Kupp to score 2 or more touchdowns is estimated at 2.80. The Rams' wide receiver has marked two or more touchdowns six times this season, including the conference finals game against San Francisco.

Bet365 also offers some odds on the Cincinnati receivers’ touchdowns. Joe Mixon and Ja'Marr Chase to score a touchdown anytime are estimated at 2.05 and 2.25, respectively. The odds on Odell Beckham are 2.37.

How the Bengals and Rams reached the finals

Cincinnati's road to the Super Bowl, strictly speaking, began last season when the club drafted one of the most promising quarterbacks of our time, Joe Burrow. It took the first year for the playmaker to adjust. In the second one, the Bengals finished the regular season 1st in the AFC North division with a 10-7 balance. In the wild-card round, the Cincinnati Bengals handled the Las Vegas Raiders 26-19. Then they handled Tennessee 19-16 in the divisional round. And in the conference finals, they defeated Patrick Mahomes and the Kansas City Chiefs 27-24.

As for the Rams, you can count their journey to the Super Bowl not even from the 2019 Finals, but from 2017, when the team was led by then 31-year-old Sean McVay, the youngest coach in league history. In three seasons, the coach managed to take the Rams to the Finals by building a top defense. And before the start of this championship, the team gained a top offense as well, trading quarterback Jared Goff for Matthew Stafford from Detroit, an experienced playmaker who had no luck with the team. The Rams finished the regular season in 1st place in the NFC West division and took turns beating Arizona (34-11), Tampa Bay (30-27) and San Francisco (20-17) in the playoffs.

The last time the rivals met was in the 2019 regular season. At that time, Los Angeles, a future season finalist, confidently outscored the Bengals, the AFC's worst team in the league, at home, 24-10.

It wasn't long ago that the Rams close to winning the Super Bowl, losing to the Patriots three years ago. The team already got their revenge on Tom Brady by beating him in the divisional round of the 2022 playoffs. Now all that's left is to get theirs. Los Angeles certainly won't have an easy time, but their eventual victory is very likely. The home advantage, Coach McVay's experience, and Aaron Donald who destroys quarterbacks as powerful as Burrow speak in the Rams' favor. In addition, Super Bowl LVI may be the only chance at a title for Matthew Stafford. The quarterback has had enough of his years in Detroit and deserves the award. The Rams have one of the strongest receiving lineups in the league - Kupp, Beckham, a progressing Jefferson, tight end Higbee; as well as running back Darrell Henderson and the winner of that very final game against the Rams for the Patriots, Sony Michel.

The Bengals have jumped way over their heads this season as it is. No one was expecting to see them in the Super Bowl, for sure. Cincinnati's youth, and almost all of the Bengals' starter players are under 25, will still have a shot at the title anyway. In the meantime, it's likely to be those who have been on the road for several years, or even a dozen, like Stafford.