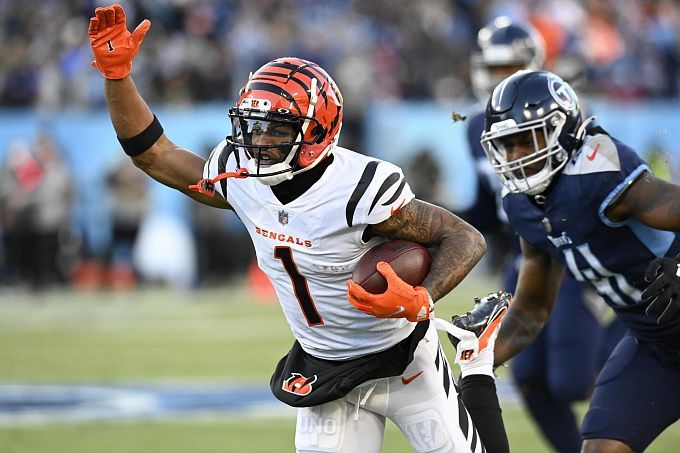 No sooner had the divisional rounds been played than the NFL's best teams faced an even greater test: the conference finals. Kansas City made it through the previous round in some absolutely miraculous way. It seems that the magic of the Native American Chiefs had something to do with it. Cincinnati, on the other hand, took and ran over the Tennessee Titans, who were seeded first in the AFC. Burrow's stock soared even higher after that game. Now the Bengals quarterback isn't just a young star - he's the Chosen One, like some Neo from the Matrix.

The Chiefs passed the Bills in the thriller of the year

What was that? A miracle? The Chiefs vs. Bills matchup in the divisional round was undoubtedly one of the most memorable games in American football history. Everyone who saw it found themselves in a trance of nirvana at the end of the game. They flew into the air and circled over mere mortals.

The fourth quarter saw Patrick Mahomes and Josh Allen put on a real show. They brought back a good old-fashioned Wild West shootout. With 13 seconds left in the game, Allen and others seemed to have decided the outcome. But Mahomes' side somehow found a way to respond and put the game into overtime. And there, in overtime, it was all decided by a coin. Many still believe that the overtime rule in the NFL needs to be changed because a team that chooses the offense after winning a coin flip can win the game with one possession — a touchdown! Patrick Mahomes' offense did just that, and Allen didn't even touch the ball in overtime.

But that's all lyricism. The Kansas City Chiefs are moving on. And there will be no subjunctive mood here.

Undeniably, Kansas City is the strongest team of the second half of the season. After all the problems the Chiefs had during the first half of the championship, they are taking what belongs to them. Satisfaction is in full swing.

But, what does all this offer in the lead-up to the matchup with the Bengals? Now that's a good question.

«In the first half, they didn't blitz a lot. They played a lot of zone coverage. That obviously wasn't working out, so in the second half they started blitzing a little more. That didn't really work out either.» - Burrow boasted after beating Baltimore at the end of the regular season. Then he broke franchise records for passing yards with one of the best performances in American football history.

Last season, the Bengals finished the championship with 2 wins and 14 losses & were one of the worst teams in the NFL. It's only been a year. And now the team brings its season total to 10 wins and 7 losses, and is electric through the playoffs, leaving Las Vegas and Tennessee out of the competition.

What's the main reason? The team's wild offense. The Burrow-Chase pairing is probably the NFL's most dynamic one of offensive players. Maybe the best. Burrow is a Ferrari at full throttle. An expensive, beautiful, powerful machine that functions perfectly. Chase is a diamond among NFL receivers. Fast, tenacious, athletic, smart. They don't seem to have any weaknesses. And they're just getting started. Burrow is only 25 years old. Chase is a rookie.

— Believe me, Kansas City is scared of this tandem to the point of trembling knees, sweaty foreheads, wobbly legs and sweaty palms! - shouts out Stephen A. Smith, the American sports analyst, in one of his broadcasts.

— Look: here we come! And we're not going to stop. I see how much work these guys have done. I know what they've been through. But we're here now. We're young, and we're hungry! - Cincinnati head coach Zac Taylor beats his chest.

The Chiefs and the Bengals faced each other in the last match of the regular season, the Bengals were luckier, 34-31.

The decisive move came on a field goal by Cincinnati kicker Evan McPherson.

“They made big plays on us on both sides of the ball. They were able to slow us down and then pick it up on the offensive side. So, we’ve got to do a better job all the way around, special teams included. They beat us, so they’re a good football team and it’s important that we have a great week of preparation here” - Andy Reid, Kansas City Chiefs head coach, said prior to the match.

Mahomes and Burrow are top NFL quarterbacks in their prime. They have the most potent offenses. And there's no reason to think this game has the slightest chance of defensive dominance. So there's a serious set of points looming here.

The Chiefs will be considered the favorites for this matchup. What's more, we ourselves believe they are the favorites to advance to the AFC Super Bowl. But don't forget the previous meeting, the hunger of the young Bengals, and their brilliant offensive pairing. And you might want to take the Bengals' win! Either way, good luck!