Content
To top
1.
San Diego Recovered
2.
Philadelphia is One of the Best in the Conference
3.
Expert Betting Tips
Users' Choice
71 200 USD

San Diego vs Philadelphia Prediction: Will the Padres Claim Their Fourth Victory? 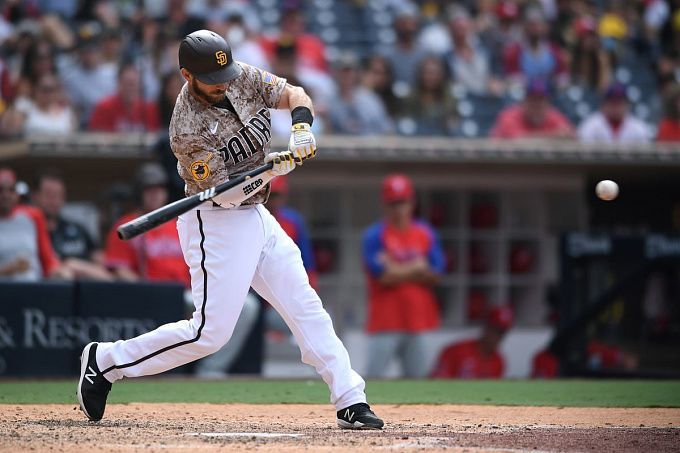 Philadelphia lost twice in Arlington to Texas Rangers and will now take a tough road trip to San Diego, one of the strongest teams. Let's pick a few bets on the Padres and Phillies' first matchup of the series.

After a horrendous road series against Colorado (4-10, 4-5, 3-8), Bob Melvin's team desperately needed to rehabilitate. The Padres made it happen, beating Arizona three times at home, 4-1, 3-2, 10-4. With 44-27, San Diego is still third in the National League standings, behind New York Mets and Los Angeles Dodgers.

San Diego's starting pitcher for the first game of the series against Philadelphia is Joe Musgrove, unbeaten so far this season, 8-0 and with a 1.59 ERA in 12 starts.

Philadelphia is One of the Best in the Conference

Since the firing of Joe Girardi, things have gotten better for the Phillies. They have won 15 of its 20 games and have improved the tournament placing. The Phillies are still only third in the National League Central Division, being 8.5 wins behind the leading Mets.

The Phillies had an unfortunate trip to Arlington to face the Rangers, losing both games, 0-7, 2-4. The rivals ended the season series 4-0 in favor of Texas. Texas was unexpectedly the most uncomfortable opponent for Philadelphia.

Pitching for Philadelphia in the first game of their series with San Diego will be Ranger Suarez, who is 5-4 and has a 4.43 ERA in 13 starts this season.

Philadelphia traveled to play San Diego straight from Texas while the Padres were preparing at home, holding a series with not the strongest Arizona. The resource factor could be critical in the upcoming game. In addition, Joe Musgrove will pitch for San Diego, the second-best pitcher in the MLB this season in terms of conceding percentage. Prediction - a win for San Diego.