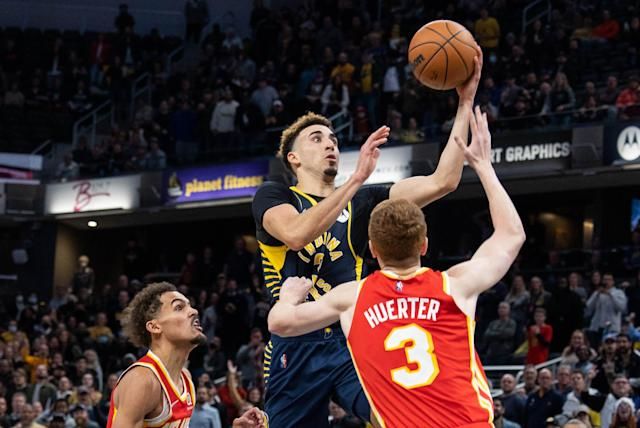 The clock is ticking fastly when it comes to the Playoffs and we are not far away from the period when the postseason will click in. The Eastern Conference is having a highly competitive race and considering the Play-in tournament, although the Wizards remain in play along with the Knicks, they both have their work cut out and with the way things are going, it doesn’t seem that they will make it to the last few spots. So, what about the ones who are in a relatively comfortable position. The Raptors have solidified their seventh spot, the Nets have a decent chance of making it too alongside the Charlotte Hornets. And apart from these three, the Atlanta Hawks also have a huge chance and as they meet the Indiana Pacers, each game holds a ton of value.

Hawks’ position in the East

The Hawks have been struggling this season especially if we consider how they made the Eastern Finals last season. They have lodged 32 wins and 34 losses and while the Raptors at the seventh place have built a more than the decent distance from them at this point, they remain with a high chance of seizing the eighth spot too. The Nets have 34 wins and 33 losses, the Hornets have a similar record and the race between them and the Hawks have been close for some weeks. They have eight games to play at home and away from home, and to be honest their schedule doesn’t look difficult, playing the majority of their games against teams with a below 50% win record. So, perhaps if they clinch at least 11-13 wins, they will be in play to go as high as eighth but the Nets can pick it up soon.

Pacers have had an abysmal season

The Pacers have been struggling time and time again this season and although they did beat 119:108 in the last game, it was a Spurs team that didn’t have their main players. So, yes, when the team goes up against an elite or even someone with around a 40% win record, their chances of victory are slashed. The Pacers have almost twice more losses than wins with a 23-45 record. They have lost five to six games in a row during five instances along with a bunch of three-game losing streaks and usually, the Pacers have struggled big-time on the defensive end. They will be heading to the lottery but yes, there is some promise in the squad especially after acquiring Tyrese Haliburton.

Trae defines Hawks: Hawks’ major offensive output comes from Trae Young who leads the team in scoring and assists, which is not a surprise when it comes to the elite guard. Huerter, Bogdanovic, and Gallinari form an impressive perimeter shooting trifecta while Hunter and Collins as the starters bring a lot of value as scorers. Clint Capela despite a falling production has been doing his thing rebounding-wise, defense-wise, and playing help defense.

Youth brigade of Pacers: The Pacers have a solid young core and Tyrese Haliburton at the Point Guard spot has the potential to become a guard like Darius Garland. Buddy Hield has become an all-around guard whose main trade is shooting from the perimeter. Chris Duarte is another impressive shot-creator while the oft-injured Malcolm Brogdon can complement these youngsters well. Jalen Smith at the big Forward can develop into a rebounding and scoring threat in the long run while youngster Duane Washington Jr. has been another promising player.

Assuming these players are available, these are my player-based props:

Points Range: The Hawks have a strong offensive lineup and recently they have been mostly in the 110-117 points range. Meanwhile, the Pacers have improved as an offensive team and they have registered 119 or more in four of the last five games, doing a brilliant job with their guard-heavy lineup that presents numerous shot creators. On the other hand, the Hawks defense has been better than it was early in the season but they do give 110 or so on a regular basis. Remember the Pacers are playing the second game on the second night and will have to make a long trip from San Antonio. That can affect them and they will play a high-scoring Hawks team. I believe the total points range here is 220-230.

Prediction: While the Pacers have hit strides in terms of improving their offense with Tyrese Haliburton and Buddy Hield making their way into the team, their defense remains susceptible against elite offenses. They can be outmatched when it comes to the size and get beat on boards here. I believe the Hawks will win this game 119:107.