Boston vs Brooklyn: Durant Will Try to Save the Game 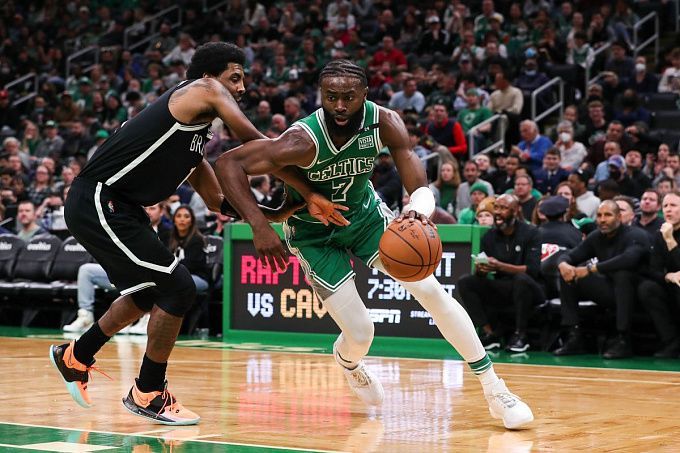 Among the Eastern Conference's top-4, Boston faced one of the toughest opponents in the league. In their first game against Brooklyn, the Celtics outplayed and won by the minimal difference. Will they double their lead in the series?

The Celtics finished 2nd in the East in the 2nd half of the season due to a very strong run. This is a very interesting team to watch in the playoffs. Boston has always been known for its tenacious defense, and the players are very skillful in doubling up on opposing and very good at reading the court. Marcus Smart was even named best defensive player of the year, so everything is clear on the Celtics' primary weapons. Things would be even better if it weren't for the injury of Robert Williams who has a very important role in Boston's defensive scheme. His namesake Grant Williams and Daniel Theis are replacing Robert. The former has been outstanding this season and impressed with his high percentage of shots from beyond the arc. Everything on offense will depend on Jason Tatum and Jalen Brown, who will probably produce more than half of their team's points.

Ime Udoka's squad has 7 wins in their last 10 games, and they defeated Brooklyn 115-111 in the opening game of the playoffs. The decisive shot at the buzzer came from Tatum, who turned with his back to the basket in the final seconds. Boston had a total of 8 players on the floor and four of them scored 20+ points: in addition to Tatum and Brown, they were Horford and Smart. More importantly, the Celtics won the battle on the opposite side of the floor with 13 offensive rebounds, 10 of which Theis and Horford combined.

The Nets have had a tremendous amount of trouble this season, even though they were nearly the odds-on favorite to win the championship before the start of the regular season. Kevin Durant missed a lot of games due to injury, but he had a lot to do with Brooklyn making the playoffs. The club's bench is mostly staffed with either veterans or very young players who aren't getting much time in the rotation yet. One can only hope for the return of Ben Simmons, which is expected just this week. Joe Harris is out for the rest of the season, and the Nets are perfectly capable of replacing him with Seth Curry and Patty Mills. The latter, however, has suffered a lot on offense, and even Bruce Brown, who specializes in defense, looks preferable to Brooklyn's starting five.

In the opening game of the series with Boston, the Nets defense suffered a lot of blowouts. Their opponent has been consistently taking open shots and Andre Drummond has struggled under the basket. Kevin Durant was the center of the attention of opposing defenders, but Irving had a nice game. He scored 39 points on 12 of 20 from the floor. Curry didn't have much success, while only four Brooklyn players scored more than 10 points - Nicolas Claxton unexpectedly being one of them. He scored 14 points.

The Nets did not get the bench they were hoping for: LaMarcus Aldridge is not ready for the playoffs, Griffin is long out of the rotation, and the young guys are still raw. Brooklyn's defense looked a bit helpless, and one can only hope Durant plays his best basketball. Kevin will have to be guarded personally, but with his skills it shouldn't be too much of a problem. Boston's offense could slump, as Smart isn't as stable in the backfield as we'd like him to be.