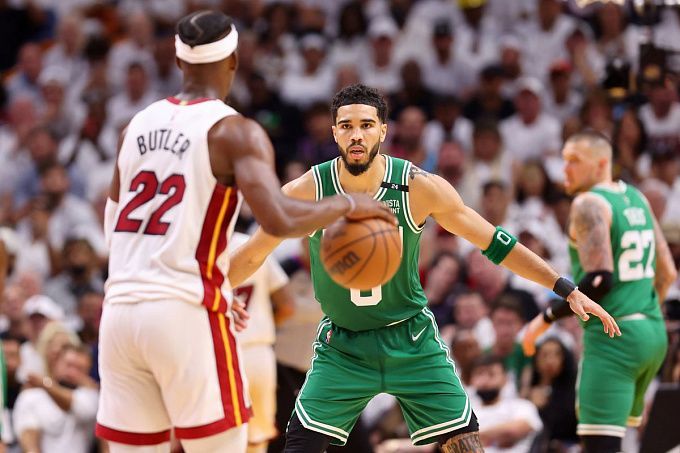 The Celtics and Heat have been impressive on defense this playoff run, but the East finals between these teams have been very productive so far. Should we expect to see some spectacular basketball again?

In the series with Miami, the Celtics have yet to play a single game with an optimal lineup. In Game 1, Marcus Smart was out due to injury, and Al Horford was on the coronavirus isolation. Derrick White missed the return game due to the birth of his child, but now all players in the main rotation are ready to hit the floor. Boston relies heavily on three-pointers in the postseason and is second only to Dallas in average long-range attempts. Last game against Miami, Ime Udoka's team made 20 of 40 shots from beyond the arc in a 127-102 win. Six Celtics players scored 10+ points, and Jason Tatum and Jalen Brown each shot over 50 percent from the field. Marcus Smart was excellent on the point and added 12 assists to his 24 points. That makes Boston's sixth win in its last ten games.

Health problems have not spared the Heat's players. Kyle Lowry still cannot recover, and his participation is currently in question. Overall, Lowry hasn't looked very confident in the playoffs, and the injury probably made a difference. Max Strus, Gabe Vincent, and P.J. Tucker may also be out, with the latter possibly aggravating an old injury. Jimmy Butler is the undisputed leader of the Miami offense, but another outstanding performance did not help the team win Game 2 at home. Herro, Robinson, and Strus had no shots from beyond the arc, and only Vincent made four 3-pointers. Butler made 11 of 18 field-goal attempts for 29 points. The loss to the Celtics was Miami's third in their last ten games.

In the Eastern Conference Finals, Boston lacked a critical player who could have helped on defense. The absence of Smart and Horford was one of the main reasons for their defeat in Game 1. White was replaced in the return game by Pritchard, who is a significant absentee from the Celtics' defensive scheme. The Celtics are particularly good defensively at home but don't underestimate Miami either. All that matters is getting Tucker on the floor, who works very hard on his side of the court. Against Milwaukee, the home team has had trouble on offense and could have the problem now. The visitors depend a lot on Jimmy Butler, and cutting off his oxygen is a realistic prospect since Boston did well even against Giannis Antetokounmpo in the East semifinals.