Charlotte Hornets vs Boston Celtics Prediction: Another defeat for Hornets 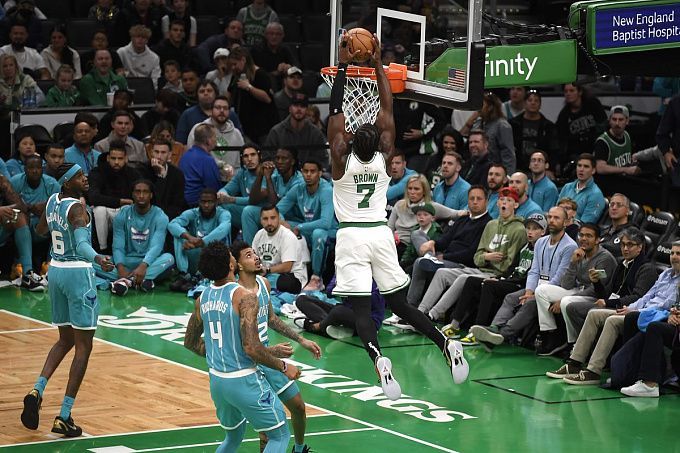 Charlotte has already lost to Boston this preseason, ending in a 41-point blowout. The Hornets will try to redeem themselves at home. Can they get revenge?

The Miles Bridges scandal left the Charlotte Hornets hanging in the balance. The team hasn't been able to properly staff their roster or sign any role players. After all, if Bridges is acquitted, they still have to find a place for him on the roster. We can only hope that the available players will improve from last season, or at least play more games. This is especially true for Gordon Hayward, who regularly misses many games due to injuries. Kelly Oubre has fallen out of the rotation, at the 3-4 position he could be a good substitute for Bridges. The club's main hope is LaMelo Ball, who had a great start last regular season but then went downhill a bit. Terry Rozier played 2 seasons at a near-stellar level, pumping up his three-point shooting. PJ Washington's progress is still in doubt as he hasn't really added much in recent years.

Maybe the new coach, Steve Clifford, can squeeze the most out of his roster, but the Hornets have been disappointing in preseason games so far. Charlotte is 25+ points apart in both games, and last meeting they fell short against Indiana, 97-122. In that game, none of the club's leaders made at least 50% of their shots from the field, and Terry Rozier was the most effective with 18 points. 20.9% shooting from beyond the arc, 61.1% shooting from free-throw line - clearly not winning numbers. It was a logical blowout.

The Celtics also had their share of scandals this summer, with Joe Mazzulla becoming the club's head coach after the suspension of Ime Udoka. As for the rest, Boston has a lot of reasons to be optimistic. The team has strengthened its roster, with Malcolm Brogdon being the biggest addition. Danilo Gallinari is still out due to injury and the latest addition at the moment is Blake Griffin. Robert Williams will miss another month and a half to two months, but the Celtics have a replacement at the center/heavy forward position. Al Horford and Grant Williams showed great play last playoffs, without them the Celtics would hardly have made the playoffs. Jayson Tatum is still capable of progressing, and the upcoming season could be a breakout season for him.

Last preseason game, Boston lost 119-125 at home to Toronto. Tatum didn't make a single three-pointer on seven attempts, but Jaylen Brown and Sam Hauser were much more effective and it was largely thanks to their efforts that the game went to overtime. Payton Pritchard also had a good game, scoring 17 points, while Malcolm Brogdon wasn't very visible at point guard and made only 1 of 6 shots from the field.

In their last 10 head-to-head encounters, Boston has defeated Charlotte 8 times. The teams have already met this preseason, Celtics winning 134-93.

Charlotte is far from optimal, but the team should gradually improve. At the very least, the Hornets should improve their three-point shooting percentage, given that they can't do much worse than they did against Indiana. The home team has good shooters, but the short bench is not in their favor. Boston has a very deep roster, with 2-3 players for every position, and that is especially evident in the preseason. We suggest betting on the following outcomes: