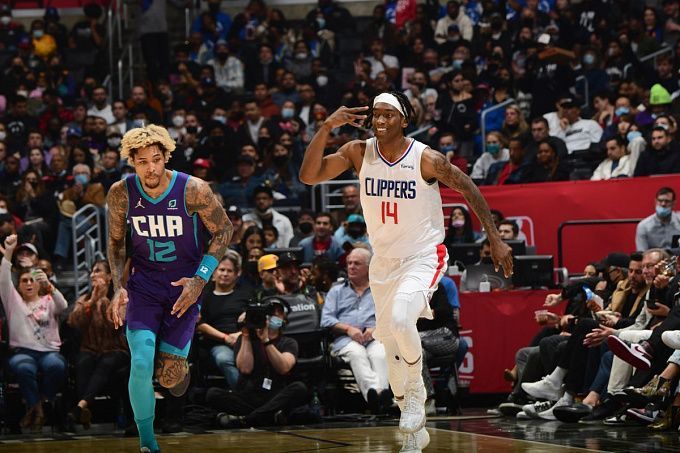 Charlotte has only beaten the Clippers on their home court once in six years. The Hornets are now stronger than ever and recently defeated the Lakers, another club from California. Will the home team improve its head-to-head stats against its current opponent?

The Hornets have won 7 of their last ten regular-season games, making them the seventh-best team in the Eastern Conference. They play a very fast-paced game, moving the ball well and shooting at every opportunity. Charlotte is 5th in the NBA in average pace per 100 possessions and 3rd in the league in shots per game. The Hornets are also 4th in three-point percentage (36.9%), and their leaders Cody Martin and P.J. Washington are making around 40% from beyond the arc. The club has five players capable of scoring more than 15 points on average also plays a significant role. Two of them may not play against the Clippers: Gordon Hayward and Kelly Paul Oubre will not play, perhaps. Jalen McDaniels is also on injured reserve and won't be in the next game.

However, Terry Rozier, LaMelo Ball and Miles Bridges did well without Hayward and Oubre in the last game. Charlotte beat the Los Angeles Lakers at home by 117 to 114. LaMelo Ball orchestrated his team's offence, although he only added two assists. Fresh off the bench, Ish Smith had 22 points on 10-of-12 shooting, and Miles Bridges was the most productive player with 26 points.

The Clippers are struggling without Paul George and Kawhi Leonard. The Californians have five wins in their last ten games, and so far, they remain in 8th place in the Western Conference. Luke Kennard has successfully gained form after the coronavirus, scoring more than 20 points in 2 of his previous three games. Amir Coffey put in some excellent performances, and Ivica Zubac helped the offence immensely at times. All the same, Los Angeles continues to play a low-key game with plenty of isolation, and the Clippers do not have the right players for that style of play. Marcus Morris' return to the lineup may help matters, but Nicolas Batum may not make the floor against Charlotte.

In their recent game against Miami, Tyrone Lue's team had little success and lost by 114-121. The slight score difference should not be misleading: at the beginning of the 4th quarter, the handicap reached the 20-point mark, and there was little intrigue in the end. More than half of their points came from bench players like Eric Bledsoe and Justise Winslow. Luke Kennard was the Clippers' most productive player. California shot just 25.7% from 3-point range and made a respectable 4-of-10 shooting in the final 12 minutes to close the gap.

The Hornets are one of the fastest teams in the league, and even with some of their stars not being very efficient, they still score more points. Charlotte averages 10.5 offensive rebounds per game, 10th best in the NBA. A winning backboard makes up for the misses, but that's just in case the leaders don't have a match. Oubre's eventual return will only strengthen the home team, while the visitors could get an excellent assist from Marcus Morris. Still, the Clippers' roster isn't nearly as good, and the current lineup doesn't match the California basketball.