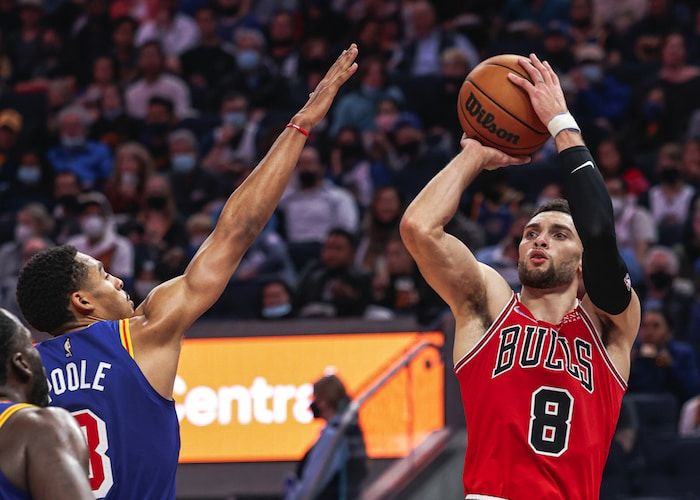 What makes NBA predictions, betting, etc. tough is the fact that many teams can go through tough periods even after starting the season strongly and that is why, it is difficult to have a grasp of different scenarios. You don’t know which one game triggers a collapse and which one game can inject confidence. And one of the teams who will play here in the Golden State Warriors have been having a difficult time recently. Injuries and lineup shuffles both seem to have derailed the team a bit since the beginning of the month. Warriors have lost four out of the last five, including a heart-wrenching loss versus the Bucks. And they will meet the Chicago Bulls, who have enjoyed their most successful period since late December, having won nine of their last eleven games. However, even the Bulls have lost two of their last three games and the last game’s loss came at home against the Nets with a 20+ points margin. However, that doesn’t mean that these two teams have been having a poor season record-wise. Which team can put behind their brief struggles? To know my game and total prediction, go to “Expert Betting Tips”.

Warriors without Green: Ever since Green’s injury has been aggravated, the Warriors have suffered at both ends of the floor. Draymond provides high-quality playmaking, top-notch defense, and overall, his vocal leadership helps the team to stay focused and motivated during most possessions. Golden State has had trouble scoring since late December period and they have lagged behind their opponents many times in getting quality shots, often forcing the issue. To be honest, even Stephen Curry has struggled recently, not shooting well at times and also turning the ball over quite a lot. On the other hand, Jordan Poole has been less effective, ever since handed over the bench role and the team balance looks disturbed. Klay Thomspon had a tough game versus the Bucks and he is still figuring it out, but if you ask me, I think Steve Kerr could have tried Thompson off the bench and should have started Poole!(Well, he knows better of course, but this is what I feel!). It is because Poole used to be the player who would step it up without Curry and now his role looks like a mishmash. Golden State may need to make further lineup changes but yes, they have a lot of talent and even without Green, I feel they are just one great outing away on both ends to propel another big run.

Bulls have a lot of scoring talent: Chicago lost the last game by a big margin and their last two of three defeats has been due to defensive issues and forcing the issue. Still, the situation is not alarming, they certainly have the roster that can figure it out, after all, there is a reason why they are at the top of the Eastern Conference standings. With DeRozan and LaVine, the team often gets 25+ points nights in tandem, Ball is a high-quality outside shooter while Vucevic pulls down big-time boards and is a handful to stop scoring-wise too. Coby White has scored 15 or more continuously off the bench while Forward Alfonzo Mckinne has been decent as well. However, there is one issue that can be decisive long-term, the team lacks a strong bench right now and rookie Ayu Dosunmu has been showing his jitters too. The team needs Alex Caruso(COVID-19 protocols) to improve the perimeter defense as the Bulls are not exactly an elite defensive team.

Points Range: The Warriors have struggled on the offensive end recently, especially at the beginning of the game and that can be due to shuffle in lineups, injury to Green or just exhaustion meaning that the team takes time in getting the rhythm. The Warriors have scored 99 or less in four of the last five games, often only playing efficiently in the second half and usually beginning poorly. Well, Curry is not having his earlier 30+ nights like before while Poole’s production has gone down way too much. On the other hand, the Bulls have been much better on the offensive end, scoring 110 or more on a regular basis this season, and even breaching the 120+ points mark a bunch of times. Defensively, the Warriors for whom allowing more than 110 was a once in 20 games type of affair, has given up 116, 118 in the last two games, the first such instance all season long and surely far from the trend. Of course, not having Green gives the team big-time troubles on the defensive end but I think it is due to the lineup shuffle more than anything. Bulls have given up 110 or more time and time again this season, and this is one area where Chicago does need some boost. I believe this will be a game where both teams score around 105-108 points. The total points range for me here is 210-220.

Prediction: I have picked Warrios to win twice in a row and they have failed miserably both the times. Now, in a back-to-back night scenario after a tough game, you’d think I’d change my pick, especially with Klay Thompson(rest) and Gary Payton II(back) out, but no, I think the Curry-Poole-Wiggins-Porter Jr.-Looney lineup is the way to go, the team has length on perimeter, shooting, and also scoring with this lineup and this was the modus operandi earlier too. While I do think the Bulls are the favourites here but hey, see, Warriors are due a big game and that is why I am willing to risk it thrice for them. I take them to win this 108:104. This is a risky pick considering the Bulls have scored 110 or more in most games and also because Warriors are struggling away from home but hey, the gut says what it says! I think Poole, Curry, and Wiggins are in for a big night here if they play.