Chicago Bulls vs Philadelphia 76ers: 76ers look to bounce back against hurt Bulls 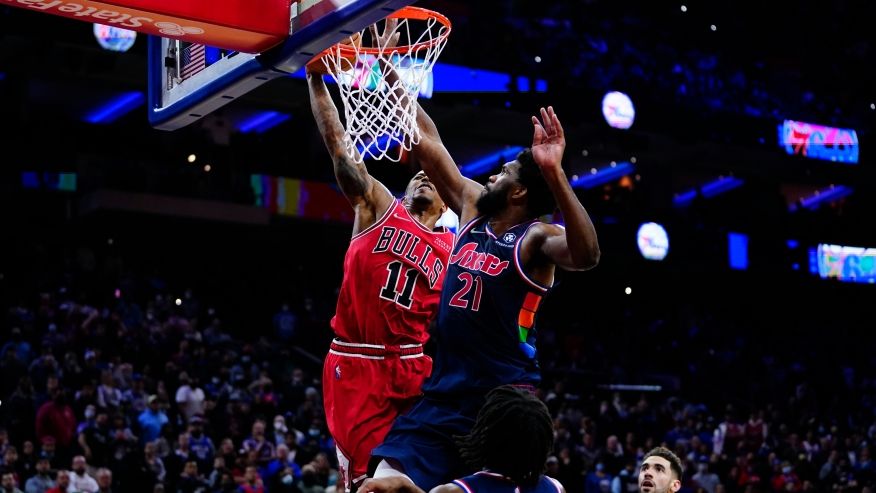 NBA is heading towards the trade deadline and this is surely a tricky window considering the number of rumors that are in circulation. There is no doubt that we are going to see some big-time trades and if we peek at the rumors, we can see big names figuring in the market as well. There are players who are disgruntled with teams and there are teams looking for a better fit. Usually, when losses pile up and fingers are pointed at the management and the players alike, this can cause fractures within a team and can result in intense players' movement around the trade deadline. Anyway, keeping this in mind, we can start talking about the game between the Chicago Bulls and the Philadelphia 76ers.

The Bulls have been strong this season and their 33 wins and 19 losses record indicate a big-time improvement compared to last season. The Bulls have won five of the last seven games and are well on their way to a great season finish, but… Yes, there is a but, the team has dealt with a bunch of injuries since January and they had some tough losses because of playing short-handed. There is no doubt that the overall roster balance is disturbed with injuries to Ball and Caruso. And in this game too, Zach LaVine is questionable for the game, another player who was out for a decent period during January. That is why the Bulls have been forced to field different lineups but thanks to the emergence of rookie Ayu Dosunmu, they are in the right direction.

On the other hand, the Philadephia 76ers come into this game after twin losses, but their overall record of 31 wins and 21 losses means that there is a lot of promise. The 76ers are highly dependent upon Joel Embiid, who is having another high-yielding season. Yes, there are issues related to the bench and they have certainly surfaced in the last two games, with the offense struggling a bit. However, defensively, the 76ers have emerged as one of the strongest squads in the Eastern Conference. Remember this team finished at the top of the Conference last season but couldn’t go past the Hawks in the Conference Semi-Finals. Anyway, the postseason is still some distance but first, can the 76ers snap their two-game losing streak here? For my game total and result prediction, hop to “Expert Betting Tips”.For my player-based predictions, go to “Player Performance Prediction”.

The 76ers need to fix the bench

Why do you need a strong bench during the Regular Season? So that you can have fresher legs when the postseason arrives. The bench also provides cover for injuries and there are some bench players who can emerge as big-time contributors during the Playoffs even if the starters play comparatively more minutes. The 76ers’ bench has been suspect throughout the season. The trouble is at the Point Guard and the big Forward position mostly but yes, even other positions look vulnerable. Shake Milton’s injury has caused disruptions but he was having some shooting troubles earlier as well. With the trade deadline near, the 76ers can make some moves to bolster the bench. And of course, the obvious James Harden-Ben Simmons trade rumors must be taken into the account.

Despite a thin bench, the 76ers have a strong lineup. Embiid has been a force on both ends of the floor and his ability to dip in buckets at a high-clip plus his rebounding abilities, give the 76ers a distinct edge in the middle. Veteran Power Forward Tobias Harris has all-around scoring abilities while he is a gritty rebounder and defender as well. Tyrese Maxey’s breakout season has helped the 76ers achieve balance too. Seth Curry is a terrific scorer and playmaker but injuries have hampered his availability. Meanwhile, Matisse Thybulle is a reputed defender and his presence in the help fixes defensive issues. Drummond has been a decent cover for Embiid off the bench while Georges Niang has been their msot high-yielding bench scorer, especially from beyond the arc. Danny Green supplies quality defense but overall, the bench lacks the scoring firepower. The 76ers are in the bottom five in terms of bench points per game.

The Chicago Bulls have had huge issues with injury. The trouble is that with Lonzo Ball gone, they miss an all-around presence while Alex Caruso’s hustle helped the team on the defensive end quite a bit. For the Bulls, the defense has been an issue, especially since the January window. This is an area where the Bulls need to work if they are to launch a deep postseason run because this is where I am not convinced that they are on par with teams like Heat and 76ers. And that is why I believe the team needs either Alex Caruso or Patrick Williams in full flow before the postseason kickstarts.

However, there is one area where the Bulls have had the edge over teams like the Heat and 76ers; offense. One advantage that the Bulls can have during the Playoffs is that both DeMar DeRozan and Zach LaVine can score both in open floor and halfcourt situations. When the game will slow down during the postseason, they can be in hunt for big offensive units and can supply offense in tandem. The one big positive for the Bulls has been that DeRozan and LaVine have built solid chemistry and have learned to co-exist, without compromising their offensive capabilities. With Vucevic in the middle and Dosunmu dishing dimes and knocking jumpers, the Bulls have a solid lineup. Meanwhile, Coby White also provides hoops off the bench. Adding Ball and Caruso into the mix will really help achieve a great balance on both ends.

There are my player-related prediction(Assuming they are all available):

Points Range: Bulls are one of the most high-octane teams on the offensive side and have hit a hot window. They have scored 120 or more in five games straight, and are in the midst of one of those hot offensive streaks. The 76ers have contrasting fortunes on the offensive end, and they have been largely limited in the 98-105 points range lately, indicating some offensive struggles. The team needs a big-time night on offense for sure.

Defensively, the 76ers have been playing disciplined and have restricted opponents to 107 or fewer points on a regular basis. On the contrary, the Bulls have allowed 115 or more in the last five games, and their defense has been susceptible since January. I believe the 76ers will take advantage of the Bulls’ defense and cross the 110 points barrier at least. I see the Bulls getting restricted around 110 as well, breaking their streak of 120 points games. The total points range seems to be 220-230.

Prediction: The 76ers come into this game on a two-game losing streak but if Embiid is healthy then I see him having a big-time night. I believe he will outplay Vucevic on both ends of the floor. I think he will score around 35 points here and take over the game from start to the end. On the other hand, I see DeRozan coming up with a strong outing too but Tobias Harris and Maxey will minimize the damage. I think the 76ers will win 116:108 here.