Cleveland Cavaliers vs Oklahoma City Thunder: Can the Cavaliers build another winning stream? 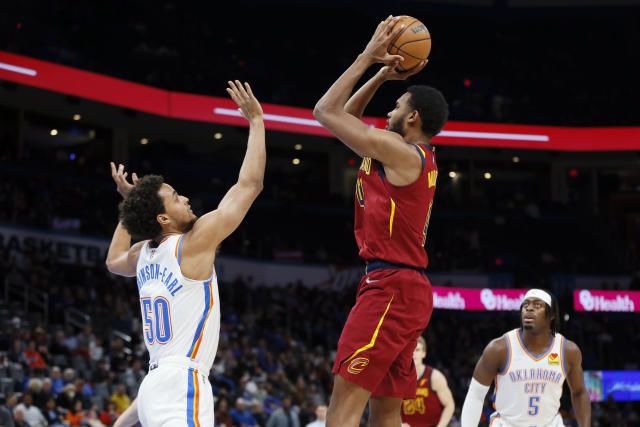 NBA betting is tricky and trust me this midseason window has made it even trickier. Why so? Well, many teams have looked fatigued, their jumpers are falling short, meanwhile, some other teams have picked up their offensive games, figuring out the team chemistry on that end while there are many instances in this window when a team has had a large-scoring first half and then whittle away in the second half on the scoring end. This can mean a lot of things, I am not saying this is the trend for every game but there are many teams to whom exhaustion has caught up and their jumpers, layups, and just the overall scoring toolkit has been affected. Anyway, let us now jump into this game between the Cleveland Cavaliers and the Oklahoma City Thunder.

The Cavaliers are having a statement season, far exceeding the expectations set upon them, winning 27 games and 19 losses, while before losing to the Chicago Bulls in the last game 104:117, they were on a five-game winning streak. On the other hand, the Oklahoma City Thunder has had an opposite season, going on lengthy losing streaks and going through blowouts after blowouts, right now having just 14 wins and a humongous 31 losses., their season going as expected. Can the Cavaliers salvage another winning streak with three games in a row lined up at the home floor? To know my game total and result prediction, go to “Expert Betting Tips”. For my player-based statistics prediction, go to “Player Performance Prediction”.

Cavaliers’ length and their defensive discipline

The Cavs did lose by 13 points in their last tilt against the Bulls, giving up 117 points, but that has nowhere been the norm for the squad. On the contrary, the Cavaliers are among the elitist defensive squads and that has largely been due to their length. With Mobley and Allen, two centers, you get superb paint defense and also tenacity to deny easy points. Markkanen along with Okoro and Stevens, mean that the team plays with just one guard in the main five, and has a wing, big Forwad, two Centers combination, as Darius Garland runs the show at one-guard. And trust me, this system needs a high-quality playmaker to work on the offensive end.

Scoring-wise, Mobley, the rookie has made this team better compared to last season, who has scored 15+ constantly this season and has a strong case for the Rookie of the Year award. On the other hand, Allen dips in paint points through alley-ops, close finishes, and low-post abilities. Markkanen can light it up from the perimeter while the aforementioned Garland is making a strong case for the most Improved Player of the Year award too with his high scoring and assists. Off-the-bench, you have another big Forward in veteran Kevin Love who has helped stretch the floor and also clamp on rebounds. As you can see that with this many bigs, you also get a lot of boards! Cedi Osman, a wing, has been off the field these days and his scoring also has a huge impact on the result at times.

Thunder’s perpetual offensive struggles are affecting the defensive side too

How long can you play quality defense when your offense struggles 80-90% of the time and the other team goes on big runs? The Thunder’s offense has been so out-of-sync this season that now we have seen their defense lose the way too. But, well, they are a rebuilding squad and that was to be expected from the team that plays multiple young players in the lineup and lacks a substantial bench. Earlier in the month, the Thunder were playing some top-notch defense, keeping the game close but their players keep hitting cold streaks and the offensive side is highly dependent upon the scoring prowess of Shai Gilgeous-Alexander, who is having a marvelous season but it hasn’t translated into many wins.

One of the major troubles has been the lack of three-point shooting and the offensive inefficiencies of Luguentz Dort, who keeps having cold scoring nights. With the lack of three-point shooters and high-yielding big who can consistently score in the low post, the Thunder has been unable to make inroads on the offensive end. Yes, Josh Giddey has had some strong all-around performances but even he has had his troubles keeping up the ante. Aaron Wiggins, Jeremiah Robinson-Earl, Ty Jerome, Tre Mann, Mike Muscala, Kenrich Williams, and Darius Bazley are not the type of players who can take over games and constantly heat up from the field. The Thunder’s lack of offense has now taken a toll on the defense too.

Assuming all these players feature in this match-up, these are my player-based predictions:

Points Range: The Cleveland Cavaliers when they are on song, have usually scored in the 109-114 range and they have played well on that end since the second week of this month. On the other hand, the Thunder’s scoring range has been 96-102 which has held them behind. Defensively, the Cavaliers play superb press defense and can help out on missed assignments, so the teams have been relegated to a 98-102 range during many games and let me tell you what, the team has held even elite offenses that go on to score around 115 regularly, below 110. The last time that Cavaliers and Thunder clashed, the match yielded 209 points in total with the Thunder getting restricted to 102 and the Cavs dipping in 107. I believe the Cavaliers will have a strong offensive game and will pass the 110 range here while the Thunder will most likely hover in their usual range of 95-102. The total points range seems to be 210-220.

Prediction: The Cavaliers have been a better team than the Thunder throughout the season. The Thunder have lost three in a row during their current road trip and possess a 6 wins and 17 losses record away from home. At home, the Cavaliers have actually not been as stellar as they have been away from home, with 12 wins and 9 losses in their home arena. However, I believe the Cavaliers will improve that home record barring major injuries and this team can make a lot of noise as the season heads towards Playoffs. I believe the Cavaliers will take this game 115:100.