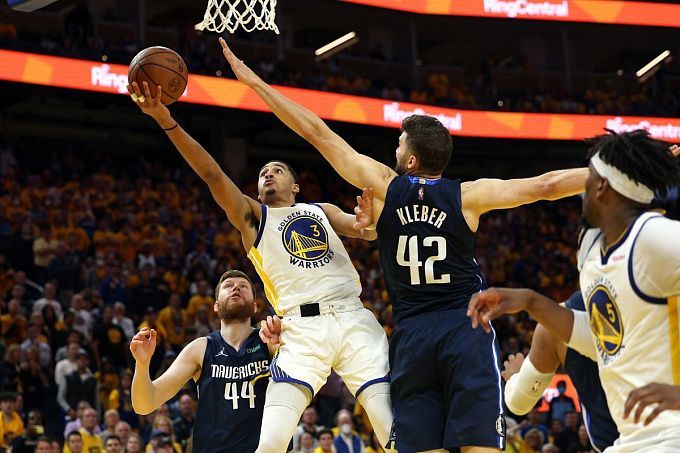 Luka Doncic has been on the score sheet with Dallas, losing the first 2 games in a playoff series on more than one occasion. The same task is facing the Slovenian and company against Golden State. Will the Mavericks be able to take the first step?

It cost the Mavericks a lot of effort to get past the Western Conference winner, Phoenix. The team proved that they can also defend at a high level in the playoffs, although stability is still lacking. Much depends on Doncic on the offensive end, but we can't ignore the fact that Dallas shoots a lot of three-pointers and ranks 4th in the postseason in three-point field goal attempts. However, their 21 shots from beyond the arc did not save Jason Kidd's team from their 2nd straight loss, 117-126, in favor of Golden State. Spencer Dinwiddie wasn't as evident this time as he had been in the closing stages against the Suns, and three players combined — Luka Doncic, Jalen Brunson, and Reggie Bullock — scored 94 of 117 points.

The Warriors have won 10 of their current 13 playoff games, but the team is still struggling. Klay Thompson has given up on defense after injuries, Steph Curry and Jordan Poole have never been known to be reliable in their half, and Golden State needed Gary Payton to back them up. He is currently out with Andre Iguodala and will not play in Game 3 against Dallas. Nevertheless, Steve Kerr's men outscored the Mavericks in their last game, and five Warriors players made over 50% of their shots on at least 4 attempts. Kevon Looney was the biggest surprise with 21 points, and Curry was the highest scorer on the team with 32 points.

In their last 10 head-to-head encounters, Dallas has defeated Golden State 6 times. Their last meeting on Mavericks' court saw the home team win 122-113. In addition to Tim Hardaway, Dallas had to do without Trey Burke and Marquese Chriss, while the Warriors lost Draymond Green and Andre Iguodala.

Back in Game 1 of the series with Golden State, Dallas created quite a few good shooting chances, but missed almost all of their open three-pointers. The Mavericks are more reliable at home and in the last round of the playoffs, they visibly transformed in the home court. Defense is one of the Warriors' weaknesses, but Klay Thompson, for example, could have made a more potent contribution on offense than he did in Game 2 against Dallas. The history of head-to-head encounters speaks in favor of the home team, with the teams having played a number of spectacular duels over the past few seasons. I suggest betting on the following outcomes:

Denver Nuggets vs New Orleans Pelicans Prediction: The Nuggets are the obvious favorites