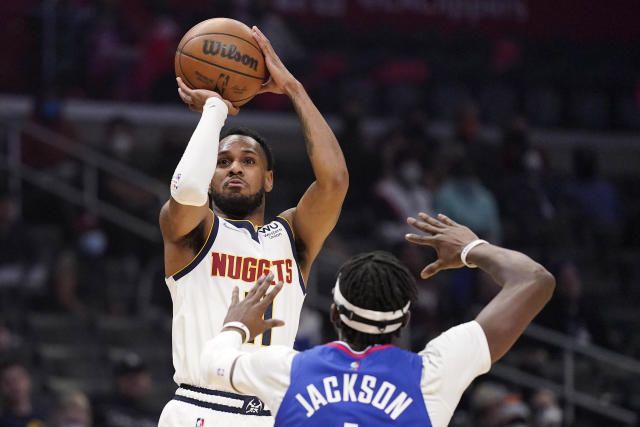 NBA Regular Season has reached the midseason stage and like any other season, this has been a topsy-turvy ride. This is also a window where the teams engage in trades on a regular basis. And one of the teams here in the Denver Nuggets traded away PJ Dozier, Bol Bol(finally!) in exchange for Bryn Forbes. And well they will face the Los Angeles Clippers, who can also engage in the trade market after learning that Paul George will miss more weeks. The Clippers have been playing without their two key players in George and Leonard for a long time. However, the experienced core of the Clippers have somehow kept the squad near the 50% win mark, and they currently have a 22 wins and 23 losses record. On the other hand, the Nuggets largely depend upon Nikola Jokic and have done a decent job of acquiring 22 wins and 20 losses. The bench depth of the Denver team has been deeply hurt with Murray and Porter Jr. not in the picture but perhaps the inclusion of Bryn Fobes can help out on that end. Now, here, they will clash against a veteran but still a vulnerable Clippers team. How will this pan out? For my game and total prediction, jump to “Expert Betting Tips”. For player-based predictions, go to “Player Performance Prediction”.

Clippers have not done that badly

The Los Angeles Clippers have won three out of the last five games, which is admirable considering how short-handed they have been. The Clippers have had their struggles on offense with the lack of shotcreators but yes, they have seen some players stepping up their game. Marcus Morris has generally been the highest yielding scorer for more than a month, and has scored 20 or more a game mostly. Reggie Jackson has been inefficient but a 26-points outing in the last game may signify he can be back on track. Batum had 32 in the last game but hey, that is not even remotely close to his usually below 10 points production but if he even gets 15 or more regularly, that can help the matters.

On the other hand, Amir Coffey as the starter has scored in the 16-21 range consistently. Bledsoe has seen his minutes reduced but he can be a more than decent playmaker in limited time. Terance Mann usually scores around 10 and has not scored as much as I expected at least but still he is a decent option off the bench. And with Ivica Zubac in the middle, the team can get 10 or so in 20-25 minutes quite often. But I think the major load will be entrusted to Jackson, Morris, and Coffey here.

Nikola Jokic leads the Nuggets in points, rebounds, assists, steals, blocks, player efficiency rating, and field goal percentage which tells you the value of the reigning MVP. Well, perhaps, the Nuggets are at times too dependent upon the Center but still, they have found different players elevating their games. Denver has been having some troubles stitching winning streaks but with Aaron Gordon, Will Barton, Monte Morris, Jeff Green, Facundo Campazzo, and Bones Hyland, the team has some more than decent offensive options.

On the other hand, the defensive side has been inconsistent but yes, not downright terrible. One issue for the team has been closing out games and that is one of the reasons why they have lost most of the games. The team acquired Bryn Forbes and he can address some of the shooting issues but hey, Bones Hyland despite his inefficiencies has shown the spark. I believe this move doesn’t address various other issues such as the wing depth. Now, can the Nuggets close out games?

Points Range: Clippers have struggled during most games on the offensive end and dspie a 139 points mark against the Pacers and they have usually scored under 100. On the other hand, the Nuggets have been a tad inconsistent too but have certainly scored more points than the Clippers this month on a regular basis. The Clippers did give 130+ points during the last game but yes, these shootouts don’t usually define the overall defensive scenario. I think the Clippers will go past 100 here but not beyond 110. On the other hand, the Nuggets will also get in the 105+ points range and perhaps be more likely to pass 110 at home. Overall, I believe both teams will have decent offensive outings. The overall points range here seems to be 210-220.

Prediction: The Nuggets can’t underestimate the Clippers. Remember during the last meeting between these two resulted in Denver giving away a 25 points lead and losing 85:87 in a poor offensive outing for both teams. With Nikola Jokic in the bag, the Nuggets will give a lot of trouble to the Clippers and perhaps Ibaka may see more action here for the Clippers. A crucial match-up here seems to be the frontline one with Clippers’ Marcus Morris and Batum against Barton and Gordon, and I believe this can be the decisive match-up after all. I believe Reggie Jackson can do a decent job here too. Overall, I think the Nuggets will take this 113:104.