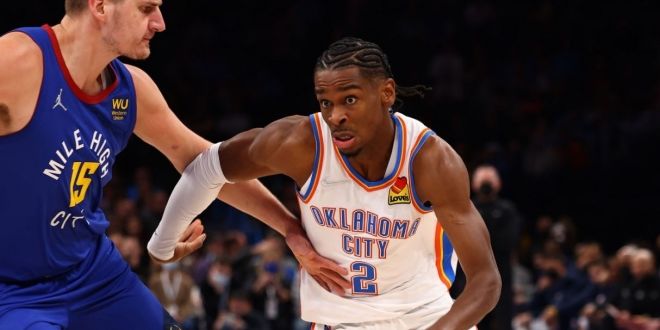 The NBA carnival moves on closer to Playoffs and some teams are staring at the standings and wondering how they can cement a higher spot. Don’t be surprised if there is a huge shuffle in the NBA table as various squads have figured out their team chemistry and have played their best basketball in recent memory. The Western Conference is also showing some turnaround in fortunes and with Warriors whittling right now, the mid-tier teams have their chances, however, the menacing Grizzlies can’t be taken lightly. So, how will the Denver Nuggets respond as they meet inexperienced and hurt Oklahoma City Thunder?

The Nuggets have won 36 and 25 losses, currently on a six-game winning streak, playing their best basketball since January. They have been running over squads with Nikola Jokic at the helm and with the way things are going, they remain in contention to seize the fourth or fifth spot but a sixth spot is already in the grasp and the Nuggets are most likely to secure a bye till the first round of the Playoffs. On the other hand, the Thunder has been facing huge troubles all season long, currently with just 19 wins and 42 losses, having lost eight out of the last ten games. They have been suffering too many injuries these days with Lugeuntz Dort, Josh Giddey, and Kenrich Williams out of the fray. Can they give the soaring Nuggets a run for their money or will this be a one-sided battle in favor of Denver? For my game total and result prediction, go to “Expert Betting Tips”. To know my player-based statistics prediction, slide over to “Player Performance Prediction”.

Thunder is hurt, the Nuggets are clicking

The Nuggets have turned it on since the beginning of the year after they were hovering around the 50% win mark till December. They have won 21 out of their 30 games, meaning 70% wins in that period. This is surely a huge boost from earlier and this also poses problems for even top teams in the West. One of the major reasons for concern in relation to the other teams is that Nikola Jokic raises his game further during Playoffs and he has gone for huge nights whilst this season too he has looked hugely motivated. If Jamal Murray and Michael Porter Jr. return before the Regular Season ends the watch out for the Denver team in the Playoffs.

One of the other reasons for the turnaround has been that different players have risen up with big games in different situations. Monte Morris has provided much-needed perimeter shooting, Will Barton has improved his offense since February, Aaron Gordon has that one special night in his arsenal every now and then while Bryn Forbes and Bones Hyland have taken turns to get it done. Surely, the bench is a concern for now but imagine how balanced the roster will look once Porter Jr. and Murray return!

Thunder is all about Shai these days

With the injuries to Lugeuntz Dort and Josh Giddey, the team is missing their second and third best scorer so the major load has been on Shai Gilgeous-Alexander. But that was the case when Dort and Giddey were playing too. The Thunder lacks a strong frontline in terms of scoring and even rebounding while their three-point shooting has been awful for most parts. This has been the single biggest problem for Oklahoma City this season because they lack three-point shooters who can click around 40% or so and average around at least 15 points a game.

The team’s defense was one of the most exciting though when there was the lineup of Shai-Giddey-Dort-Earl-Favors. The team was able to limit the opposition’s quick scoring opportunities but with Dort and Giddey out, the team is missing the same defensive edge. I think among the most rebuilding squads, the Thunder’s defense had been the best when they had a healthy starting five. However, there is a lot of work to be done and despite having an exciting scorer in Shai, a two-way wing in Dort, and an all-around promising player in Giddey, the Thunder is a long way away from being a Playoffs team as of now.

These are my player-based statistics prediction:

Points Range: The Nuggets have done an incredible job of producing offense these days and with Jokic in the middle, this is barely a surprise. Not only Jokic, but the most of team has been rising to the occasion and with well-balanced scoring, they can run over most teams these days. On the other hand, balanced scoring is surely not the way for Thunder, they have no other viable offensive and consistent offense away from Shai Gilgeous-Alexander. That is the reason I see them being held under 110 points here and the Nuggets scoring at least 118. I believe the total points range here is 220-230.

Prediction: The above assessment surely hands the advantage to the Nuggets and it will be one of the biggest upsets if they manage to beat a red-hot Nuggets. The Nuggets have taken advantage of the lax schedule and against Thunder, they can dominate both ends of the floor. This is why I believe that they will win here 122:103.