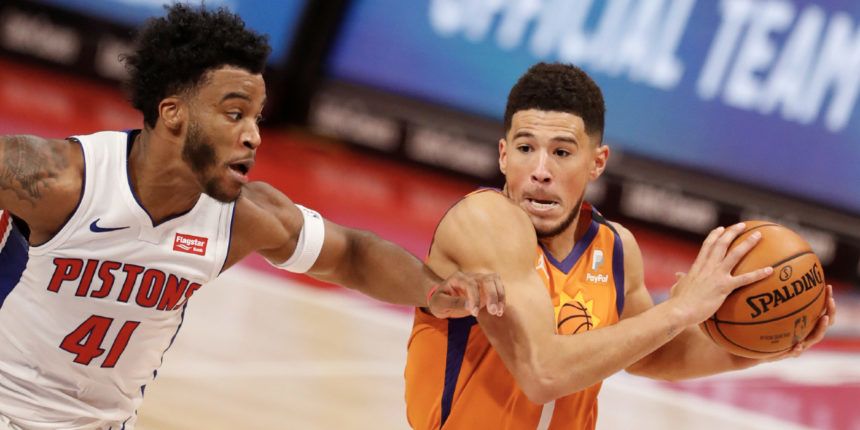 The NBA betting scene can produce a multitude of results and there are a lot of factors to be taken in consideration before placing bets. You can see some teams pick up their games during a certain window after failing for most of the season while some teams who can falter after a strong season, showing exhaustion and the rigours of a long season. Here, one of the teams who have picked up their game after one of the worst starts, right now stationed at 10 wins and 31 losses. They will face the Phoenix Suns who have the best record in the league, the only team with less than 10 losses at the time of writing and with a whopping 32 wins. Even with an improved play, Detroit will have their hands full playing against a charged-up Suns team who have more than enough depth to overcome slight wobbles. Anyway, it is clear that the Suns are the favourites in this contest, but can Pistons show that they are not like that before? To know my game and total prediction, jump to “Expert Betting Tips”.

Pistons’ much better play, Suns are on different level

Pistons have picked up their game: Detroit had lost more than ten games in a row during one point of the season and had been through a terrible 4 wins and 25 losses record. However, they are playing their best basketball on both ends of the floor, winning five of their last eight games, beating teams like Utah, Milwaukee, and Toronto in the window who are playoff bound. Not only that but it has been a team effort rather than the reliance on one or two individuals. Bench players Trey Lyles, Cory Joseph, and Josh Jackson have turned up with some special performances recently and Lyles especially has been impressive. Hamidou Diallo has been a great and exciting off-guard and things have changed a lot ever since he has been starting regularly. Saddiq Bey is a high-producing scorer and despite his lingering inconsistencies, he has played much better than earlier in the season. Cade Cunningham is a work-in-progress but is often the leader in terms of assists. However, Killian Hayes has not shown the type of expected development and Isaiah Stewart’s play has been down on both ends compared to earlier in the season. Still, the Pistons may not be a Playoff level team but they have shown some great outings recently.

Suns are difficult to deal with: Phoenix is a nightmare to deal with. They know how to pace the game, can both play the grinding, slow style and also can be highly effective in the shootout types of scenario. Why are they successful? I think it is the offensive and defensive balance few teams have achieved, a balance in scoring, clarity of roles and if there is any team that I think need not make major moves around the trade deadline, it is the Phoenix outfit. With a Point Guard of Chris Paul’s calibre, dishing and swishing, an off-guard like Devin Booker, who can pour fire from different areas of the floor on offense, three dynamic two-way wings in Crowder, Bridges, and Johnson along with a highly reliable Center in Deandre Ayton who can score, rebound, and defend at an elite level, the Suns also have effective backups in Payne, Shamet, a growing Jalen Smith, and JaVale McGee. Phoenix has played a high-level of basketball during most games.

Points Range: It isn’t like the Pistons are usually running a high-quality offense but they have found different players stepping up their games and finding new ways of scoring with each passing week it seems. Detroit is usually scoring in the 97-103 range and they can be shut down for fewer by a defense like Suns on most nights. On the other hand, the Suns have scored in the 100s, 110s, 90s, all sorts of ranges and their defense keeps finding ways to restrict opponents. They have allowed around 110-120 points twice in the last five games, but hey, they have also restricted opponents in the 89-95 range, mostly, they do keep opponents in the 95-105 range if anything. I think the Phoenix Suns will restrict the Pistons around 100 here while they will themselves mount up 115+ here. These are the probabilities for the points range: 210-220: Most Likely, 220-230: Likely, 230-240: Least Likely.

Prediction: Well, if you have read till now, it is clear who will start as favourites, clearly the Suns. Phoenix has been playing at a high-level for all of the season and apart from a few losses, they know how to eke out wins once an affair has been settled. I believe the Pistons will have a hard time containing Ayton here while I believe the wings Bridges and Crowder are in for a big night too. However, in the end, it will be Booker who will take over the game and dip in 30 or so. I see the Suns taking over this game by the end of the third quarter and the fourth quarter will be for deep bench players. I see the Suns taking this contest 119:101.