Content
To top
1.
Golden State are back in the finals with a bang
2.
Boston made it to the finals with great difficulty
3.
Injured reserve
4.
Head-to-head encounters
5.
Expert Betting Tips
6.
Betting options:
Users' Choice
1709 200 USD

Golden State Warriors vs Boston Celtics Prediction: Opponents to explore in a high-scoring match of the final series 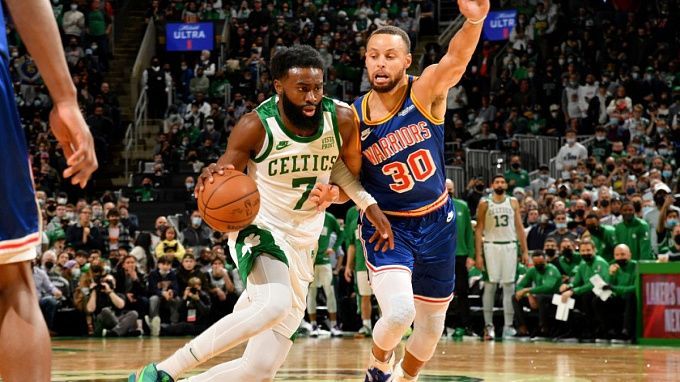 The Golden State Warriors and Boston Celtics will meet in the NBA Finals for the 2021/22 season. Who will be stronger in the first game of the series? Let's pick a few options to bet on at once.

Golden State are back in the finals with a bang

The 2022 Finals will be the sixth decisive series for the Warriors in the last eight seasons. The San Francisco team repeated the result of the Chicago Bulls in the 1990s and proved their status as the strongest organization of the decade in all of the North American sports.

Boston made it to the finals with great difficulty

The outcome of the conference finals against Miami was decided in game seven. Ime Udoka's team had beaten the Heat 100-96 on the road, nearly losing their 17-point lead in the game. But all ended well. One of the most decorated teams in basketball history is finally back in the big finals after 12 years.

Golden State has only one win over Boston in their last 7 games since March 2019.

The first match of the series, even the final one, does not decide anything, so the opponents usually explore, finding out the strengths and weaknesses of the rival. The lack of result pressure will loosen up the teams, and they will surely have a productive encounter. That has to be the case with Steph Curry and Klay Thompson for Golden State and Jayson Tatum and Jaylen Brown for Boston.