Content
To top
1.
Golden State Failed the First Game
2.
Boston Had One of Their Best Streaks Ever
3.
Expert Betting Tips
Users' Choice
1633 200 USD 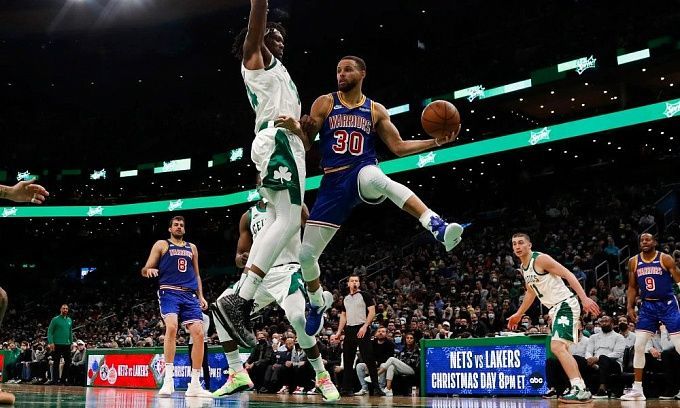 Golden State dominated the first game of the series, but managed to give Boston a fourth quarter and eventually lost. Will the Warriors take revenge in the second game? We'll select a few options to bet on.

Before the fourth quarter of Game 1, there was no sign of trouble for Steve Kerr's team. The Warriors led by 12 points and seemed to be in complete control on the court. In the final minutes, however, Golden State stopped scoring and Boston shot regularly from beyond the arc, closing the quarter 40-16 with a final score of 120-108.

The Warriors lost their home court advantage in the first game of the series. San Francisco did more than decent for the first three quarters, though. Curry even set a Finals record with 6 three-pointers in the first quarter. Curry had a total of 34 points. Andrew Wiggins scored 20 and Klay Thompson - 15.

Boston Had One of Their Best Streaks Ever

The Celtics' play reeked of hopelessness after three quarters in the first game of the final series. Ime Udoka's team struggled to score and let their opponents do whatever they wanted in their half. In the fourth quarter, however, the situation turned upside down. Boston sprang into action, shot 40 points, conceded 16, and closed the game. Golden State will have to win at TD Garden, which is always challenging.

Al Horford was the Celtics' hero. The veteran, especially in the final stretch, was outstanding on defense and offense, scoring 26 points. Jalen Brown scored 24 points, and Derrick White had 21. Jason Tatum scored only 15 points but had 13 assists.

Boston pulled off a beautiful comeback, literally tearing Golden State apart in the fourth quarter of Game 1. The Celtics are to be praised. However, we shouldn't neglect the Warriors' own slackness factor. Steve Kerr's team had no trouble at all during the first three quarters and simply didn't get going in the fourth quarter. A flick on the nose will surely wake up the Warriors and they will not allow this kind of failure in the Game 2. Prediction - Golden State will take a confident revenge.