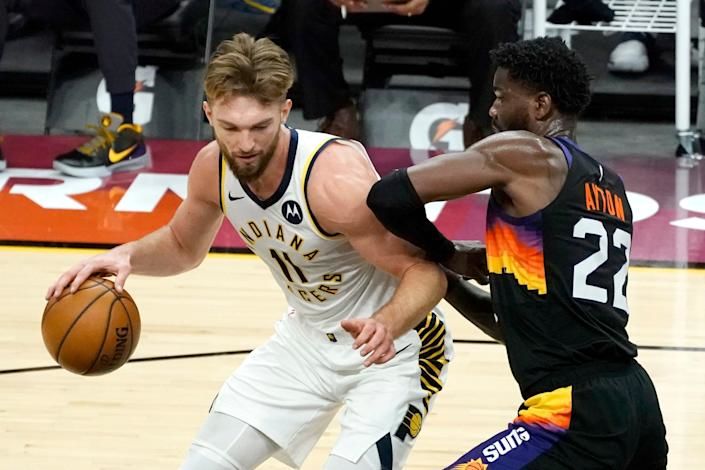 The NBA betting scene is complicated due to variables involved in the game. Still, there are some favourites, the teams who are in incredible rhythm during most of the season, meanwhile, there are teams who fail to gain any sort of form throughout the season. On one hand, the Indiana Pacers are struggling big-time, losing 27 and winning just 15 all season long, continuously fluffing their chances. On the other hand, Suns are the best record-holders in the league, they have an incredible 31 wins and just 9 losses. There are many reasons why the Suns have been doing well and why the Pacers have been unable to get going, and we are going to discuss some of them here. Indiana has lost eight out of the last nine while the Suns have won four out of its last five and have been on a eighteen games winning streak before. It is clear which teams hold the impetus here, but it is the NBA, you never know who is in for a hot night! For my game and total prediction, go to “Expert Betting Tips”. Go to “Player Performances” for player-based performances.

Pacers have been misfiring: Indiana has had no rhythm since the start of the season and there are many issues to be addressed right now. The Pacers have been losing a lot of games recently and this has been in part due to their lack of depth at multiple positions and a bench that can’t hold the fort for large parts of the game. While Sabonis has scored 16+ points and grabbed 10+ rebounds in most games, Myles Turner has been inconsistent on the offensive end. With Brogdon, LeVert, and Duarte, all three guards have been in the COVID-19 protocols for the most part. Lance Stephenson has been a great pick-up but he doesn’t seem to be the long-term answer anyway. The Pacers are mostly unable to build big leads, and when they are playing catch-up, they are unable to put together quality possessions late in the game. For the Pacers, it seems like the time for the current core is ticking and the management can end up making a bunch of trades.

Suns’ amazing balance: Phoenix has been playing a high brand of basketball all season long. What I like about this squad is that it is comfortable with different types of games, whether they are low-scoring physical start-stop type of games or they are fluid shootout type of games. This team has been built to outlast in both types of situations and has done well in adapting to the opponent’s scheme, which is what makes them special. With two highly talented guards in Booker and Paul, one a high-scoring off-guard and the other the best playmaker in the league, and both terrific closers. Along with three wings in Johnson, Crowder, and Bridges, a highly dependable Center in Deandre Ayton, who can seize the paint on both ends, the Suns also have a strong bench unit that presents multiple scorers, rebounders, and defenders. Overall, the Suns are difficult to deal with on both ends of the floor and can shut the shop early.

These are the player-related statistics:

Points Range: Indiana has been struggling to hold the fort on both ends of the floor, mainly, their energy looks down-and-out during most games. Pacers have conceded 113 or more in three of the last four games and they struggle to keep the scoring down especially against elite offensive teams. Scoring-wise, they have mostly figured in the 104-108 range this season but have even scored 100 or less against elite defensive squads. For the past three games, the Suns have figured in the 99-106 points range but they have the ammo to go past 110, it depends upon what type of game is played. I think here, they will go past 110 at least and I see them having a big offensive game. On the other hand, I believe the Pacers will struggle to go near 110 compared to the Suns. For me the total points range here is 215-225 but more specifically 210-220.

Prediction: Naturally, a team that has the best record in the league and thrice more wins than losses and is one of the best road teams in the league enters with an edge during most contests. Yet, no team is unbeatable in the Association, you never know when the script flips but would you all really want to bet against the Suns these days? On the other hand, the Pacers have not been a safe bet at all during the course of this season. This is why I am unwilling to risk betting for the Pacers and will side with the bookmakers here. I see a scoreline of 112:105 in favour of the Suns here(Somewhere around that).