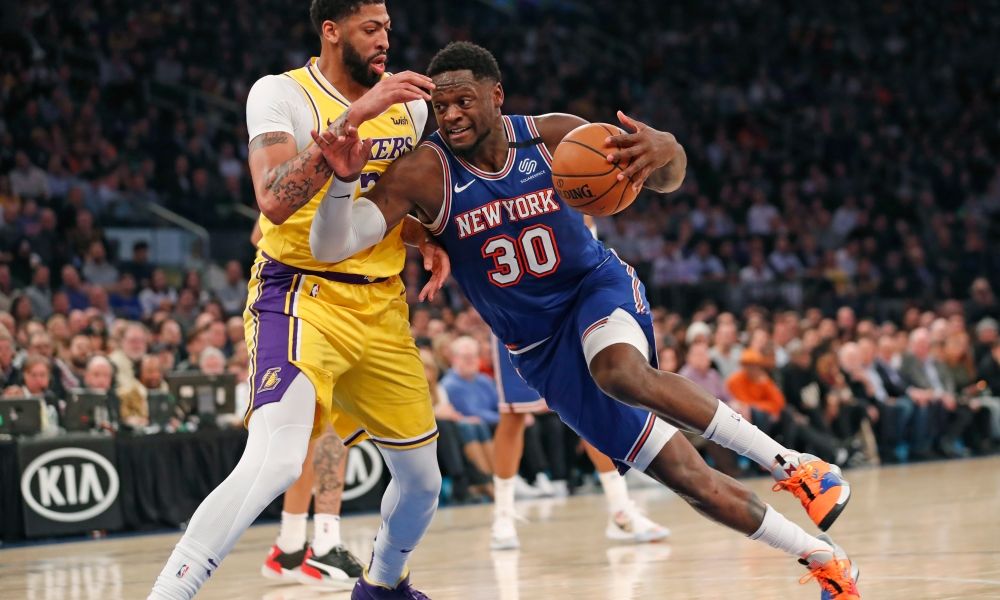 The NBA trade deadline is nearing and it will not be a surprise if we see a stream of trades. We have already seen a big trade made by Clippers and Trail Blazes as the Clippers received Powell, Covington in exchange for Bledsoe, Johnson, Winslow, and a future pick. These trades are the classic ones where a team is looking to unload a hefty contract to lessen the luxury tax burden while the other is just looking to bolster a lineup that has undergone various injuries. Let us see how this works out for the Clippers and I believe they have done a wonderful job of getting Powell here. Anyway, the two teams who meet here in the LA Lakers and the New York Knicks are surely going to be exploring the market.

The two teams have not met the expectations set upon them so far. The Lakers have won just 25 games and lost 28 games, just hanging on to a Play-in spot as of now. They have lost four of the last five games and without LeBron James, they have derailed even further. LeBron is not likely to play here and has been listed as “Doubtful”. The duo of Davis and Westbrook hasn’t been able to compile as many wins when LeBron has gone. However, many writers have claimed that the Lakers can’t make big-time trades due to many market-related reasons. What can they offer here?

On the other hand, the Knicks have had their own troubles. They have compiled 24 wins and 28 losses, which is a slim return for a team that held so much promise on paper. They have lost seven of their last nine games and their struggles can be traced to the prior periods where their offense keeps getting ice-cold. This is why many writers believe that the team is going to engage in a bunch of trades soon. Can the team restore some pride against another struggling team? For my game total and result prediction, jump to “Expert Betting Tips”. For my player-related prediction, go to “Player Performance Prediction”.

Lakers have had another cold spell

Lakers have completely lost their way ever since LeBron James has been down but it wasn’t like that the Lakers were winning a bunch even when the superstar Forward was playing. The Lakers have continuously gotten beaten on the defensive end and their tendency to give away a ton of offensive rebounds while also enable to get multiple opportunities on the offensive end, thus they have gotten beaten on the boards all season long. Lakers had one of the best defensive teams in the league last season with strong perimeter defenders in Kentavious and Schroeder, but this season, the Lakers have been among the worst defensive teams by a long margin compared to the last season.

Russell Westbrook has been now playing with other superstars for some seasons now but I am of the firm belief that this decision to play with superstars hasn’t helped this career. I believe Westbrook is the type of player who thrives when he has the reins of a team and could have been more successful if circumstances allowed him to stay that way. Now with Davis and LeBron, a triple-starred team, Westbrook has been once again in the tricky territory. Anyway, with Anthony Davis, Monk, Westbrook, Johnson, Bradley, Horton-Tucker, Howard, Reaves, and minus Anthony and James, the team can showcase some struggles but the duo of Davis and Westbrook has a lot of potential as Davis has been playing at a high-clip since he has been back.

New York Knicks have been unable to get a big winning streak going throughout the season and one major reason for that has been their offensive troubles. The team has been among the bottom-five offensive teams throughout the season and their struggles can be traced to multiple players hitting lengthy cold streaks time and time again. The team had been solid defensively but hey, when you keep missing so many shots, your defensive discipline is bound to take a hit and such has been the case for the Knicks too. This means that there can be some trades around the corner for the Knicks.

Team’s ace Julius Randle hasn’t had the type of season he’d have wanted, playing out of control at times and taking tough shots(forcing the issue basically), maybe, he himself wants a trade of scenery. Kemba Walker who was brought in during the offseason hasn’t had a feel for his shot throughout the season and he is the most likely candidate to be traded. Alec Burks and Evan Fournier have struggled to strike it from outside as well while young RJ Barrett keeps going on poor shooting streaks. Immanuel Quickley has struggled like the rest of the team while I think Obi Toppin will benefit from playing with a big-time playmaker. Overall, the team has seen massive struggles offensively and it is time that the management may look to move on from some of their key players.

Points Range: Lakers have been a high-scoring team throughout the season and they have been scoring 110 or more on a constant basis this season. With Davis in the fray, they can be in play to get these many points again. However, they will play against a defensive-minded Knicks team but even they have given up 110 or more in three of the last four games as their team chemistry keeps falling off.

Offensively, the Knicks have scored usually 103 or fewer points and on average, their struggles have been higher on the offensive compared to the Lakers. With the trade rumours buzzing around various Knicks players, you can see the game being down on both ends. I think both teams will score at least 104 here. The total points range here seems to be 210-220.

Prediction: Don’t be surprised if there are some trades before the game takes place and well, this happened during the Trail Blazers game today. Anyway, assuming both teams have the current rosters intact, I think the Knicks can be a bit down before the game considering the broken-up team chemistry and the constant trade rumpus. This is why I see the Lakers winning this 112:106 here.