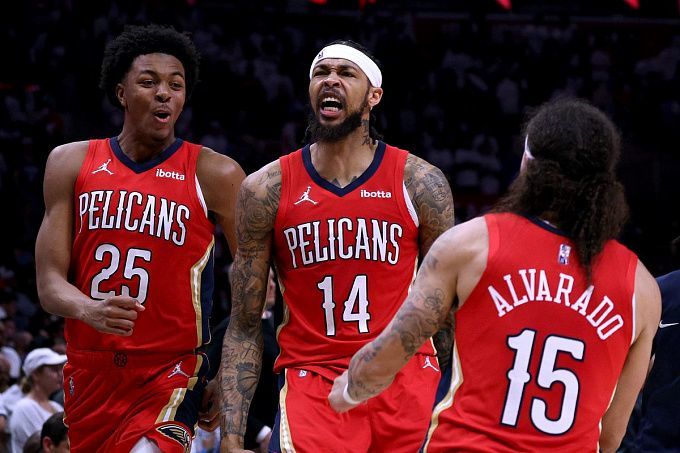 Another NBA game day begins with a matchup between the Clippers and Pelicans. Los Angeles comes into the game after three straight losse. Will they be able to break their losing streak?

Against all odds, the Clippers look rather weak so far. The team with one of the deepest rosters in the NBA has won only two of the five regular season games and currently sits outside the Eastern Conference's top 10. Los Angeles has been saving Kawhi Leonard, but knee problems have manifested themselves, and for now the star forward remains out of the roster. Marcus Morris, who missed the previous 2 games for personal reasons, may return for the game against New Orleans.

In the absence of Morris and Leonard, Tyronn Lue's team lost twice to Oklahoma. In the previous meeting, Paul George appeared on the floor; before that, he had missed one game. The star's appearance did not save the Clippers, a 110-118 loss for Los Angeles. The Californians often lost the ball and their opponent had 13 more shots on the court. This time the Clippers missed a lot from beyond the arc, while only hitting 9 three-pointers in total. Norman Powell with Reggie Jackson and John Wall did not help matters either, as each shot at least 50% from the field for a combined 56 points. Paul George was virtually invisible, scoring only 10 points in what was a blowout loss to a Western Conference underdog.

The Pelicans have won 3 out of 5 regular season games and now share 8th place with Golden State in the Western Conference. The roster issues didn't stop New Orleans from beating Dallas, but it's hard to get results over the distance without three of their starting five. Herbert Jones and Zion Williamson will probably be back for the game against the Clippers, but Brandon Ingram is unlikely to be back in the starting lineup. Dyson Daniels is questionable and Kira Lewis has been in the sideline since the start of the regular season. As for team statistics, New Orleans ranks fourth in the NBA in three-point shooting (39.6%), and it's all thanks largely to Trey Murphy, who is among the top 8 players in the league with 61.5% of his shots.

Willie Green's team lost their last regular season game on the road to Phoenix with a score of 111-124. It didn't help that six New Orleans players scored more than 10 points apiece. Jose Alvarado and Trey Murphy again shot well from beyond the arc, but CJ McCollum had no luck at all. Jonas Valanciunas was once again the most productive player on the team with 25 points, but the team missed a lot from the paint and part of the responsibility rests on the shoulders of the Lithuanian center. The Pelicans also allowed their opponent 14 offensive rebounds which should certainly have an effect on their final score.

The Clippers have lost five of their last seven games. If we look at this trend, an overtime win for New Orleans would be an interesting bet, offered at 2.20 by Betway.

The Pelicans have conceded more than 110 points in 4 of the last 5 games. Therefore, it might be worth trying Los Angeles Clippers' Individual Total Over 114 points for 1.99 at 1xbet.

The Clippers do not look impressive at the start of the season, and they have a lot of problems on offense in particular. Even Oklahoma held off Los Angeles without much trouble in one of their matches, so New Orleans can also make something happen. The Pelicans aren't known for their exemplary defense, but they should improve on their side of the court with the addition of Herbert Jones. If Zion returns, the visitors could even clinch a win, so our take on the upcoming game is the following:

New York Knicks vs Philadelphia 76ers Prediction: Will the Knicks Be Able to Take Revenge for These Failures?

Minnesota Timberwolves vs Denver Nuggets Prediction: Will exhaustion hold back the Nuggets' domination?