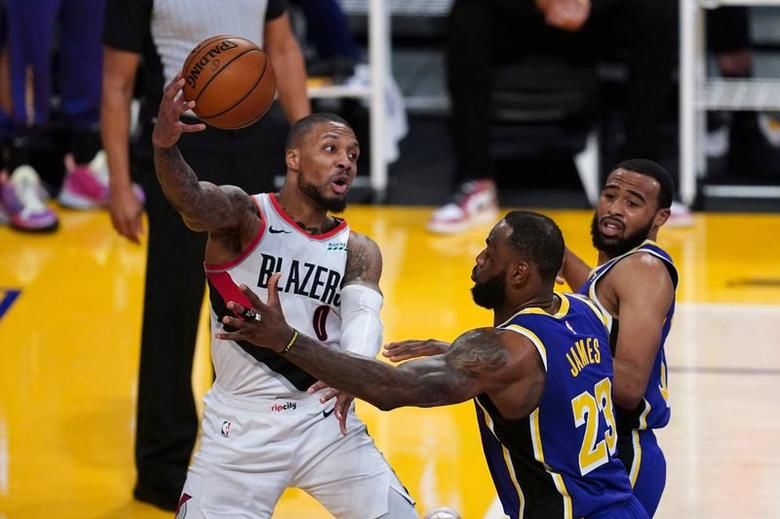 COVID-19, injuries, management changes, trades, team chemistry issues, and various other factors line up to pitch in the terrain of the topsy-turvy basketball world of the NBA. The Association is right now grappling with the threat of the pandemic and all the teams have this point taken a hit in some way or the other. For teams like the Los Angeles Lakers, there is a problem that stretches beyond the paradigm of pandemic and that is the most crucial part of the season; figuring out their best lineups. The team has pitched in so many different starting lineups that I have lost the count at this point. Most of the changes have been with the inability to find enough hustle throughout the game and the team may need younger bodies. On the other hand, the Trail Blazers, the losses are piling up and thus, both the teams in Lakers and Trail Blazers, the matters are becoming urgent and some trades may be made. In this game, both teams come face to face. For my game result and total prediction, go to “Expert Betting Tips”.

Lakers are vulnerable: Lakers have been facing trouble on both ends of the floor. They have two big issues, lack of hustle and losing the momentum in the third quarters or in late-game periods too. The team has often played the worst basketball in the second half and many times, opponents can run a couple of fast breaks and the Lakers end up playing catch-up. That is why Lakers have to develop double-digit leads right from the get go and make sure that when they run out of game, late in the game, they stand a better chance every game. LeBron has been playing some superb basketball but he can’t do it alone on both ends of the floor, his legs take a toll on the defensive end at this point. With Anthony Davis out, the lineup has become less speedy and the big Forward/Center position is absent right now. That is the most pinching aspect, without your key bigs, you will have trouble avoiding offensive rebounds or present size in the frontline. The Lakers have to find more players like Stanley Johnson, who are athletic, still young, and can run the floor, ala Gary Payton II.

Trail Blazers have no rhythm: Lillard is back in the hunt like last season and he is having big nights. The problem? Except for Norman Powell, there is a lack of quality shot-creators. The team needs McCollum for more fluent offense, meanwhile on the defensive end, the Trail Blazers have been underwhelming all season long. Still, I believe with Nance Jr and Nasir Little, the team can get a bit of hustle, power rebounds, and scintillating finishes. Meanwhile, for me, it is the play of Anfernee Simons that needs to go up. He is shooting around 30 in most games, hovering in the 6-9 range, that is not going to get it done with the guard position all centred around Damian Lillard, who is playing some great basketball under a lot of perimeter defending bodies on him and one-on-one defensive pressure. With Nurkic and McCollum out, the team lose inside and outside options so they have to rely on the Forwards slashing towards the rim, this is where the Portland Trail Blazers have some potential to build a solid slashing and cutting team, except that they need someone apart from Lillard and Powell to fuel the offensive production. The team needs more from Simons and they need Larry Nance Jr. to raise his scoring by 5-6 points a game, that means somewhere around 15.

Points Range: Lakers and Trail Blazers have not been dependable betting options at times, especially Portland Trail Blazers who are stuck on offense and vulnerable on multiple counts. Lillard is the prime scorer, and Norman Powell is the only other consistent producer. So, for the Lakers, at least in that sense, Westbrook, James, Anthony, and Monk have been productive enough to allow the team to stack up around 110 or so. With these four, you get shooting, driving, and Westbrook along with James perform playmaking duties. Overall, I think against Portland, playing at their home floor, the Lakers should at least get around 105 and aim for 120 here. I believe the Trail Blazers will have a better shooting night than usual and at least cross the 105 mark. So, I believe the total points range is 216-227.

Prediction: LeBron, if he plays and Westbrook, if he plays, they can still wreak havoc at the offensive end, especially in the case of LeBron, who has scored 30 or more for more than a week. He is in remarkable form while Westbrook, despite his turnover issues, has given both inside game and offensvie rebounding, which is something to treasure and evens up the turnovers at times. From Portland’s perspective, if Norman and Lillard get something like from someone among Little, Nancer Jr., or even the struggling Simons, then they are set for a more than decent reply. I still believe the Lakers will take a 117:108 victory here. I think someone among Talen Horton-Tucker, Monk or Stanley Johnson will have a big game if they play. I think the Lakers have a 56% chance of win which means I have kept a “moderate” faith in Trail Blazers while I have “more than decent” faith in the Lakers.