Miami Heat vs Atlanta Hawks: Can Hawks do what Timberwolves did to the Grizzlies? 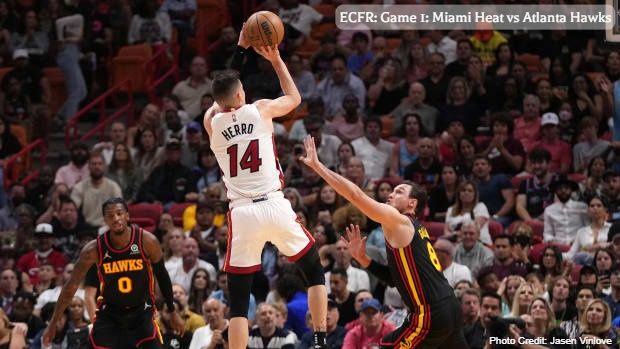 Gosh, I missed this. Anyway, one interesting thing about the Play-in tournament I also noticed last season was that the team that qualifies through it enters with more playing rhythm usually and the top-ranked team is rested for a few days which can affect the rhythm. I think that is one problem with the Play-in tournament and I am not discounting the Timberwolves' win against the Grizzlies at all, but trust me, a five-six day layoff versus a constant rhythm can play a huge role. And will we see such dynamics being replicated in this battle versus the Miami Heat and the Atlanta Hawks?

The Hawks were down by ten points in the first half against the Cavaliers and when Trae Young turned up the heat, the squad was able to erase the deficit. He piled up 38 points in the game and that is a great precedent considering this performance came away from home. Kyle Lowry will have his hands full containing Young here but he will receive help from Butler, Robinson, and Strus as well. The Heat will need to press the Guard on the perimeter but he knows how to break apart defenses.

But the problem for the Hawks is that they will play without Clint Capela and that will mean containing Bam Adebayo will be a big hassle. I have a strong feeling that Bam will come up big here with a 20+ points and 10+ rebounds night. Jimmy Butler will be huge on both ends of the floor and the Hawks will face trouble limiting Butler who can take over on the offensive end and surely ups his game during the Playoffs.

Then there is the battle of bench guards Bogdanovic and Herro. Herro has been a terrific isolation scorer this season and he is sure to give the Heat more depth here. It will be interesting to see if both Bogdanovic and Herro end up with 20+ points here. Lowry is also an impressive offensive player and I have a feeling he will have a strong Playoffs here. Robinson and Strus will be vital as the perimeter shooters while Huerter, Hunter, and Gallinari will be crucial for the Hawks. Hunter had 22 points in the first Play-in game versus the Hornets while Gallinari can get close to 20 and Huerter can nail around 10-15 points.

Assuming they are available, below are my player-based statistics predictions:

Points Range: The Heat’s defense is tight with physical and hustling players like Lowry, Robinson, Vincent, Adebayo, and Tucker, who can play switch defense on a regular basis. Trae will be the main challenge for the Heat but you can’t overlook the form of Hunter, Gallinari, and Huerter either. However, I see the Heat doing a great job on the defensive end and shutting down most Hawks’ offense players. Okongwu will be adjudged the task of containing Adebayo but I see Adebayo outplaying the Hawks bigs by a big margin. The Heat will see big contributions from Butler, Adebayo, and Herro here in my opinion. I also see Trae struggling from the field in the second season. I believe the total points range here can be 220-230.

Prediction: I believe the Hawks will struggle on the offensive end despite Heat being rusty. I see the Heat will be coming with a hot streak here. The Hawks rely heavily upon Trae Young to produce the perimeter scoring but one thing is for sure, the Heat will be locked in on the perimeter end here. I see Adebayo coming in with a lot of fire and helping the Heat seal the deal 116:106.