Miami Heat vs Philadelphia 76ers: Heat to start the conference semifinals with a confident win 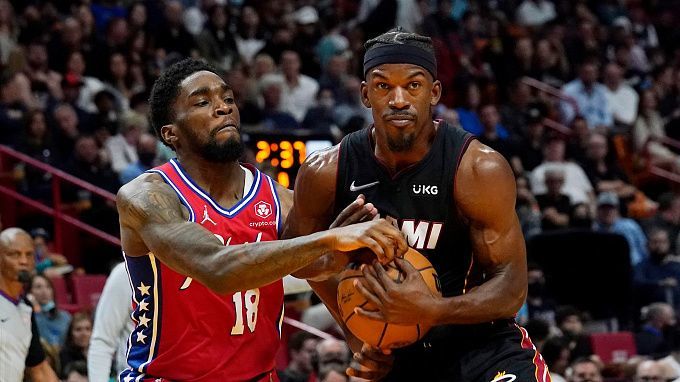 The Miami Heat were very confident in the first round of the playoffs, beating Atlanta in five games. How will Erik Spoelstra's team start the second round series against Philadelphia? Let's pick a few options to bet on at once.

Miami is unstoppable even without Lowry

In the first round of the playoffs, the Heat confirmed their status as one of the top favorites in the East. Erik Spoelstra's team left no chance for Atlanta, closing the series in five games – the only loss in this confrontation was by a margin of only 1 point.

Kyle Lowry will not participate in the first game of the series with Philadelphia. That's a big loss for the Heat. It's not a key factor, however. The point guard missed his team's fourth and fifth games against the Hawks, and his absence had no effect on the result. Miami has a deep roster and losing even one of their most important players doesn't seem like a big deal.

If Lowry's loss isn't a disaster for the Heat, the injury to Joel Embiid looks fatal to the Sixers. The Phillies' leader suffered an orbital fracture in the series against Toronto and will definitely miss the first encounter with Miami. It is not yet known if the Cameroonian will appear in future games, but even if he does return to the floor, his potential effectiveness due to the injury is highly questionable.

A lot of the responsibility in Embiid's absence falls on the shoulders of James Harden. The guard was excellent in Game 6 of the series with Toronto, making 15 assists on just three losses. But as you know, stability and Harden are almost the opposite. It's a far cry from the fact that the bearded superstar can bear the burden of leadership.

Miami is the clear favorite for the upcoming game. In the absence of Embiid, Philadelphia does not seem to be a very dangerous opponent for the Heat. It is likely that Eric Spoelstra's team will not just beat the 7-point margin, but rather thrash Doc Rivers' team.

Prediction: a confident win for Miami.