Miami Heat vs Philadelphia 76ers: An exciting battle between the top two teams in the Conference 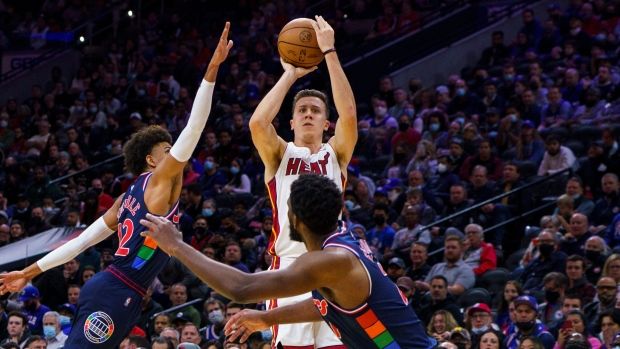 The NBA is a hectic league. Why? Well, you can go on lengthy winning streaks during multiple periods and still find yourself fighting for a playoff spot. Or worse, you can garner more than 60% of wins in this highly competitive atmosphere and still see yourself get out just in the first round. This is why the demanding atmosphere of the NBA makes it one of the trickiest business models in the world for the NBA players, management, and coaches alike. There is a lot of pressure in the social media world and if you think that most of the players are oblivious of the name-calling, no, they are not. Anyway, more about that later, let us jump into this game between the Miami Heat and the Philadephia 76ers.

Miami is at the top of the Eastern Conference and the team has garnered 42 wins and 22 losses, winning eight of their last ten games. The squad has been playing at a high clip all season long and has emerged as one of the title contenders so far. Their depth looks unmatched throughout the Conference. On the other hand, the Philadelphia 76ers have been on fire since acquiring James Harden and they are on a five-game winning streak. The team has also seen incredible contributions from Maxey who seems to be getting more open playing alongside the dominating guard James Harden. They are the second-best team in the East and will be in an uphill battle versus the Heat here. Can they continue their winning train or does the Heat has other plans? To know my game total and result prediction, go to “Expert Betting Tips”. For my player-props prediction, slide to “Player Performance Prediction”.

While the Heat has three more wins and one fewer loss than the Sixers, the top-spot battle is still wide open. The Bucks, the Bulls, and the Celtics are not far behind and the top-five to be in a brilliant battle at the moment. The Heat has played a high brand of basketball since lately and during a month-long period, Miami has won ten out of the last twelve games. On the other hand, acquiring James Harden seems to be working for the 76ers so far, they have clinched five straight wins, one against a high-octane Timberwolves squad. With James Harden, the team balance looks much improved. However, their depth can be tested against squads like Heat, Grizzlies, Celtics, etc. And both these squads must especially be wary of the Celtics who keep on rising up the table.

The Heat has one of the deepest lineups both in terms of offense and defense. Butler, Robinson, Lowry, Tucker, and Adebayo are all terrific individual defenders while they can also perform versatile maneuvers as switch defenders. On the other hand, their offense is also versatile considering they can deploy Tyler Herro off the bench, someone who has continuously scored over 20 points this season. However, their bench is not all about Herro, Gabe Vincent, Dedmon, Caleb Martin, and Strus have all stepped up their games when needed while the main five have great shotcreators in Lowry and Butler surrounded by a shooter in Robinson and an amazing inside player in Tucker.

The 76ers can be intimidating

What has made the 76ers so formidable recently has been that the inclusion of James Harden has had a positive impact on Maxey who is getting more open looks. Harden is a willing passer and Embiid needed a playmaker like him to make a deep run in the Playoffs. Harris doesn’t need a lot of touches to be effective while Maxey has adjusted well as the team’s dynamics have shifted. There is one huge concern about the bench and I think if there is an area that can hold the 76ers back, it can be the lack of depth. Unlike the Heat, the team lack cover for injuries.

Jimmy Butler and PJ Tucker are questionable for the game and if they end up missing the game, the Heat’s defense will weaken significantly. Remember Kyle Lowry has also missed a bunch of games for the Heat and will not play here. Therefore, the major burden will lie upon Herro and Adebayo. Herro is a reliable scorer and knows when to turn on the scoring knob while Adebayo gets it done more often than not. Adebayo will match up against Joel Embiid, one of the toughest assignments in the league while James Harden is sure to give Gabe Vincent and Duncan Robinson a ton of headache at the perimeter. And Maxey is no less threatening while Tobias Harris will also be a tough match-up considering how depleted can the Heat be here. They do need Lowry back to restore the depth.

Points Range: Heat has been a high-producing offensive team but if Butler is absent, that area can be hurt. However, this is where the Heat has done a fantastic job; identifying different options when there are multiple injuries. On the other hand, the 76ers have identified their potent offensive combination and they have scored 120+ in five games straight, their best offensive stretch throughout the season. While Heat’s defense is usually highly effective, a lot depends upon the availability of both Butler and Tucker. Still, I see the Heat containing the 76ers below 120 here while scoring more than 111 themselves. The total points range seems to be 220-230.

Prediction: A lot depends upon whether Butler and Tucker play or not, if they are absent it will be tough to contain the Harden-Maxey-Harris-Embiid offensive combination of the 76ers. Meanwhile, the 76ers' defense can show some cracks from time to time and the Heat’s deep shooting lineup can surely take advantage of any crack presented. If Butler and Tucker play, I give the Heat a 53% chance of winning if they don’t then I believe the 76ers will perhaps win this 115:111. (If Butler and Tucker play then perhaps the Heat will take this 116:108).