Milwaukee Bucks vs Toronto Raptors: Giannis will pose problems for the Raptors 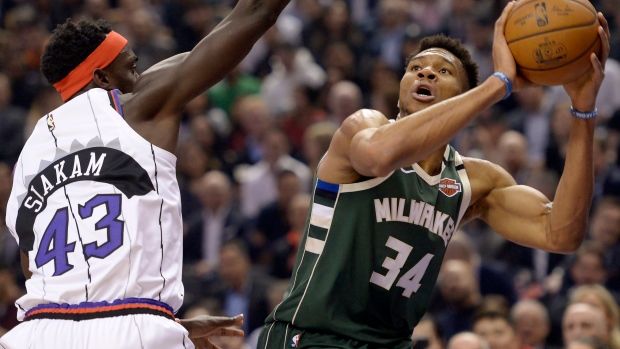 The midseason period is here and this usually spells the coming of the All-Star weekend coming near. Well, I am not personally a big fan of the All-Star Weekend and the All Star Game is actually the least exciting game for me in terms of what we usually see in the NBA realm. Anyway, the midseason window also can trigger a lot of trades and many teams look to address the lingering issues. Anyway, let us come to another intriguing mid-season battle as the Toronto Raptors visit the defending champions Milwauee Bucks. The Bucks have not had the same resounding season as their championship one but hey, there is plenty of time left and the last game win versus Warriors can bolster the confidence. On the other hand, the Raptors have done much better this month but still, their lack of bench depth has continually hurt them. The Bucks have an above-average 27 wins and 17 losses record while the Raptors have 20 wins and 19 losses. The Raptors have lost two in a row and one of the losses against the Pistons must hurt, can they recover against the Giannis-led Bucks? To check out the team form and play form, go to “Team and Player Performance”. To get my game and total prediction, glide to “Expert Betting Tips”.

Bucks have Giannis: Bucks’ Giannis Antetokounmpo creates match-up advantages for the Bucks. There are a few players, if any, that can stay attached to him as Giannis keeps wreaking havoc near the rim with both his 7ft frame and amazing hops. Now, with Middleton and Portis with him in the frontline, you can’t have the luxury to keep multiple Forwards attached to this power player. That is why Giannis, Middleton and Portis also enjoy the luxury of finding open spaces. Both Middleton and Giannis are terrific passers, so if you are open on the perimeter, watch the ball head towards you! I like the Bucks offense for two simple reasons, first, they have a strong frontline that has brilliant finishing moves, and second, they play inside-out basketball quite a bit and it makes for some efficient basketball. With Jrue Holiday out of the picture, they miss a one guard who can both push the tempo up, act as a playmaker, seal the perimeter and provide backcourt leadership. Still, Grayson Allen nailed some crucial jumpers to aid the efforts and with such a sturdy frontline, a great off-guard rebounder in Donte Divincenzo, the Bucks have a lot of hustle.

Raptors have depth issues: In the past two games, one huge issue has resurfaced for Toronto; poor second quarter offense. And why is that so? This is when the bench comes in and the team doesn’t have a substantial wing or guards who can sustain the effort set-up by Van Vleet, Anunoby, Siakam, and Barnes in the starting lineup. The team has two strong bigs off the bench, but there is no guard or Small Forward depth at all, and this means more burden upon the starters who end up playing heavy minutes(Four Toronto players are among top-fifteen players in minutes played and have lodged 35+ minutes on average). This is why late in the game, the jumpers fall short, the effort falters and the team’s starters are exhausted. The trade deadline is approaching close and the Raptors are in need of a backup who can give 20 minutes or so. Can Toronto find such a backup soon, because with these many minutes, their players can also pick up injuries.

Points Range: With Giannis, Middleton, and Portis in the frontline for the Bucks, the Raptors’ Forwards Boucher, Barnes, Siakam, and Anunoby will have their hands full, and with Khem Birch gone, the team lack further bench depth Offensively, the team has three efficient shot creators in Van Vleet, Siakam, and Anunoby, all players who can score off dribble drives, shoot the long ball, and also get an in-between game going. However, that may be it! This is why Chris Boucher will need to up his scoring and instead of hovering in the 6-8 range he will need to get in the 12-15 points range. Achiuwa can be a big rebounding option and an extra body to get in the way of Antetokounmpo but it is the offensive side that has not come through in the last two games. How can Raptors find a way to score more than the 87, 95 points production in the last two games. Offensively, the Bucks have scored 110 or more multiple times and that can be the case here too. On the other hand, the Raptors defense has been strong so yes, perhaps their athletic and popping Forwards can contain the Bucks frontline scoring. But where will they find their offense? I think the Raptors will get near 95 and Bucks in the 99-107 range. The total points range seems to be 195-205 or I will lean into the 200-210 points range.

Prediction: I believe the Raptors defense can dig in here and stall the Bucks to an extent but the trouble is that they are lacking a substantial bench. The Raptors need rookie Scottie Barnes to get into the 15-20 range(Big ask). Siakam, Anunoby, and Van Vleet to chip in 20+ while for me, Chris Boucher is the wild card offensive player for Toronto here, he really really needs a big game here. It will be interesting to see how the big bodies of Siakam, Boucher, Achiuwa, and athletic Barnes deal with Antetokounmpo, that is a highlight here for sure. Remember, the Raptors beat the Bucks 117:111 during the last meeting but that was a home game for the Raptors and Giannis didn’t play in that game. I think in the end, the Bucks will outlast the Raptors 109:99.