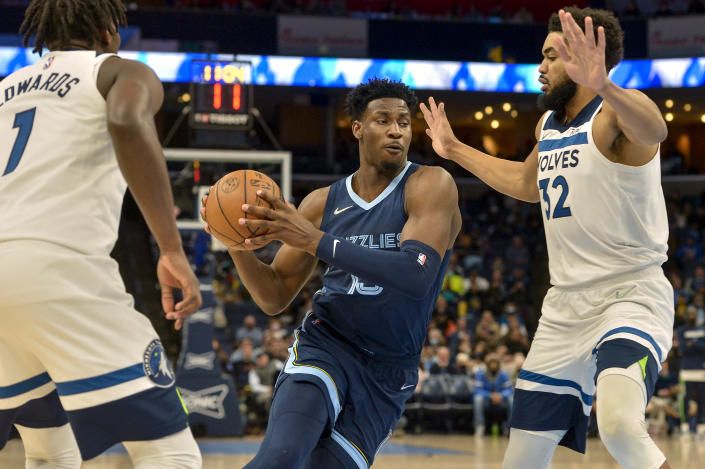 NBA betting heats up again as we wake up to the post-All-Star Break and as the postseason nears, the situation will only become tense as there are various Play-in spots and also the top-six positions remain in play. Thus, we can see a desperate dash by various teams looking to solidify their rankings. We are heading towards a vital window and for many teams, this is a desperate time as they don’t want to leave too much burden as the season comes to a close. If there is a time to catch up, they gotta begin now. However, for the Grizzlies, the season has been a honeymoon phase and as they clash against the Minnesota Timberwolves, a high-scoring battle can ensue.

The Grizzlies have become one of the top three squads in the league, winning six of their last seven games and overall, they have compiled 41 wins and have only lost just 19 games. With Ja Morant and a deeply built roster hand, Memphis is bound to keep on winning from here on. On the other hand, the Timberwolves have been an incredible offensive squad and they have won 31 and lost 28 games. However, they have lost three out of their last five games and have struggled to win against elite teams. How will they fare against an elite squad in Grizzlies? To know my game total and result prediction, hop to “Expert Betting Tips”. For my player-based prediction, go to “Player Performance Prediction”.

Timberwolves have a great scoring unit

The Timberwolves have built a substantial offensive squad and they are able to play both up-tempo and slowed-down version of offense. Having Anthony Edwards provides them with elite driving game and his improved shooting has helped the cause too. Karl Anthony-Towns is one of the best shooting big men and can also take it hard to the rim off the dribble. Meanwhile, D’Angelo Russell is an incredible lefty shooter who is also a high-yielding playmaker. Meanwhile, McDaniels, Beasley, Vanderbilt, and Beverley round off a versatile scoring unit. The major problem for the team has been inability to put on winning runs against 50%+ win teams and that is the next step that this time is due.

Grizzlies are making a lot of noise

Grizzlies have had the top-three record throughout the season and they have been terrific on both ends of the floor. Their offense is deep courtesy of Morant who is an incredible athlete, while Desmond Bane forms a great offensive pairing in the backcourt. Jaren Jackson keeps the scoring train ticking at the big Forward position while Adams pulls down offensive boards, is a great playmaker and can finish inside. A bench of Clarke, Jones, Williams, Konchar, and Anderson gives this team a deep bench. The team leads the league in steals and their running game has been the best in the league which gives them quick scoring in short time. With Jaren Jackson and Adams in the frontline, the team is able to grab boards and also pack the paint.

Points Range: This has the making of a high-scorer for various reasons. Both teams can finish inside, shoot from outside and have outstanding scoring balance night in and night out. The Timberwolves have been able to crack past 110 on their home floor more often than not while the Grizzlies are able to rack up big-time points away from home on a regular basis. Defensively, the Grizzlies have been better than the Wolves on average but at their home floor, Minnesota will be motivated at that end too. I see an up-tempo style of play with the points range in the 230-240 bracket.

Prediction: While the Timberwolves have been on fire at their home floor, winning around 90% of their games but hey, they will run into a Grizzlies squad that has compiled five wins in a row away from home and has beaten every elite squad in the league this season. I believe the Grizzlies will get a ton of steals here and also seal boards while playing a wonderful overall game. That is why I think they will win this game 120:114.