New Orleans Pelicans vs Houston Rockets: the Pelicans’ losses are too serious 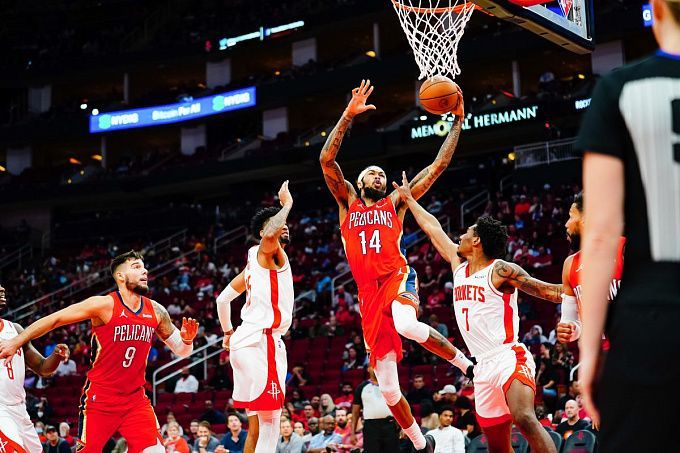 New Orleans will face Western Conference underdog Houston in another regular-season game. Despite their opponent's vulnerability, the Pelicans will have a hard time looking for a win. Can the home team handle the loss of McCollum and Ingram?

The Pelicans have lost their last four regular-season games, despite having won four straight matches prior to that. New Orleans is still 10th in the West, but their lead over their closest rival has shrunk to a bare minimum. CJ McCollum entering COVID protocol and Brandon Ingram's injury have made things worse. Zion Williamson's debut has been consistently delayed this season, and Kira Lewis' and Larry Nance, Jr.'s injuries have severely depleted the depth of the lineup, so the battle to make the playoffs promises to be difficult. Willie Green's team lost their last game to Charlotte in a blowout, 142-120. It didn't help that seven of the New Orleans players had 10+ points and rookie Trey Murphy made seven 3-pointers to become team's highest scorer with 32 points.

The Rockets won only 2 of their last 10 regular-season games. Houston is by far the worst in the NBA in terms of most statistical indicators, so the Rockets' last place in the Western Conference looks legitimate. But that's not what matters right now. Jalen Green is finally finding his game and living up to expectations. In 10 games, the promising rookie is averaging 20.6 points on 49.7 percent shooting from the field. Kevin Porter Jr. shined in some games, but Christian Wood missed about a week due to illness — his participation is now questionable. Jae'Sean Tate and Usman Garuba are also out.

In absence of Wood and Tate, Stephen Silas's players lost to Dallas (100-131) at home, though before that they defeated the Lakers with a score of 139-130 in overtime. The Rockets hit only 6 of the 30 three-pointers against the Mavericks, making this one of the most significant factors. Only Porter Jr. made successful long-range shots, who along with Josh Christopher was the highest-scoring player on the team with 17 points apiece.

In their last 10 head-to-head encounters, each team had 5 wins. Last game, New Orleans won at home 110-97. CJ McCollum did not play but Brandon Ingram did, making 11 of 17 shots and scoring 26 points. The Rockets had to do without Eric Gordon but had Christian Wood in the lineup.

Houston is playing some of their best basketball right now, and the progress of Jalen Green has been a key factor. They're missing Christian Wood, though, but there's a good chance he'll show up right now. New Orleans's defense is poor, and without McCollum and Ingram they simply can't make up for their mistakes. We can only hope for a high field-goal percentage from Devonte' Graham or a nice forecheck from Jonas Valanciunas, but that may not be enough. The Pelicans are one of the weakest in the NBA in their current form, and a win would be a huge success for them. I suggest betting on the following outcomes: