New Orleans Pelicans vs Houston Rockets: Pelicans hunt for fourth win in a row against a vulnerable Rockets 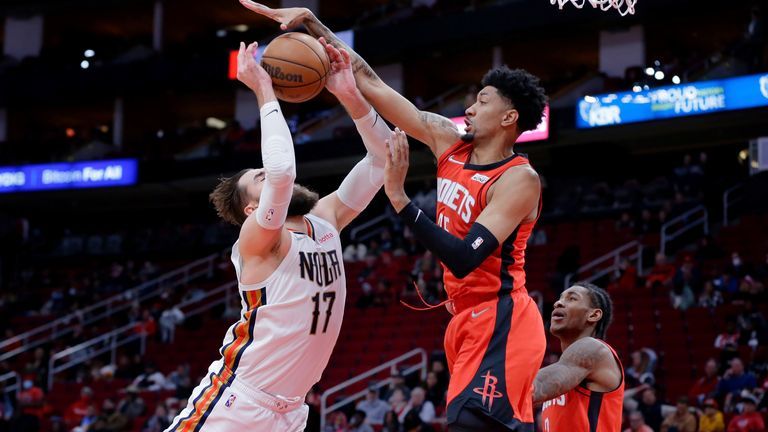 The NBA trade deadline is just a couple of days away and there is no doubt that we are going to see big changes in the roster makeup of various teams soon. There are various rumors floating around but yes, many of them can fall short considering that a lot goes into pulling off trades. Clippers, Cavaliers, Pacers, and Trail Blazers have already engaged in exchanges but that list is sure to grow as the deadline nears. The two of the teams who engage here in the New Orleans Pelicans and the Houston Rockets are likely to engage in trade scenarios here.

The Pelicans have grabbed 21 wins and 32 losses, right now on a three-game winning streak. The Pelicans have been playing some decent basketball recently and after a four-game losing streak largely due to the lack of two key players in Ingram and Valanciunas, they have certainly bounced back. However, there is news that the team is trying to trade Josh Hart. There are a bunch of rumors that have surrounded Josh and it will not be a surprise if he is traded before this game versus the Rockets.

The Rockets have lost 38 games and just won 15 games. They have lost six out of the last seven games, including a 107:120 loss to the Pelicans in the last contest between the two. Well, this has been the case for the Houston squad throughout the season and this is how their fate was predicted ever since James Harden left the scene. They are also figuring in numerous trade rumors and three of their starters in wing Jae’Sean Tate, Center Christian Wood, and off-guard Eric Gordon can be on the move soon, especially the latter two. Let us see if they move these players soon. However, can they eke out a win against Pels here? To know my game total and result prediction, jump to “Expert Betting Tips”. To know my player-based statistics prediction, go to “Player Performance Prediction”.

Pelicans have a shot to make the Play-in tournament

Pelicans started the season on a slow note and the repercussions of starting the season with just one win and twelve losses can be felt now as they play catch-up now. Still, they haven’t done so poorly since then, scrapping 20 wins and 20 losses since that period, which makes for a 50% win record. This is the second time they have won three in a row and their current four-game winning streak has included some great improvements on the offensive end. However, the team can trade Josh Hart soon and if they can get a serviceable shooter or a springy big Forward in the trade, that can help the team mount a Play-in tournament type of run as the race to the 10th seed is pretty much wide open.

Brandon Ingram has been an incredible all-around presence throughout the season while Jonas Valanciunas has been a terrific rebounder and he can also pounce on open lanes and pull in points regularly. Jaxson Hayes has been highly influential recently, scoring 19-22 points in three of the last four games. Meanwhile, rookie Herbert Jones has shown great growth throughout the season, especially on the offensive end. Devonte Graham is having his troubles from beyond the arc and if he gets it together, I am sure the Pelicans will be more effective. Overall, the team can build a solid core around Zion and I think he should stay because the Pelicans can develop a Cavs’ like one-guard, three Forwards, and a Center type of system once he is back.

Rockets have not been effective once again this season and this is not a surprise. Something that isn’t a surprise considering that the management didn’t bring in any major names into the fray during the offseason and didn’t show much interest in bolstering the team. It meant that the team is in the classical rebuild mode and has set the field for a high draft pick. The team can be in play to acquire some big-time players in the draft and they do need a more solid foundation I feel and bringing a young wing can help them quite a bit. Houston has had a painful season but the fans must have expected more of the same.

What do they have currently to offer? Eric Gordon can help bring in some late first-round picks and I believe Christian Wood can have some demand among teams that need a strong Center to make a postseason push. I don’t know if Jae’Sean Tate will be moved but they can get a first-round pick if they tried. What can a trade package that involves Gordon, Wood, and Tate bring? Anyway, the team does have two promising guards in Green and Porter Jr., one an athletic and floor spreader in Green while Porter Jr. can be the long-time playmaker. Alperen Sengun can become an all-around presence. While Kenyon Martin Jr, Josh Christopher, and Garrison Mathews can be developed into a long-term option too.

Points Range: The Rockets have scored mostly in the 103-108 points range these days and that has been the case for them. With Christian Wood in the middle, the shooting lanes are open for Green, Mathews, Porter Jr, and Christopher, with Tate. On the other hand, the Pelicans have scored 111 or more in three games straight. They scored 120 in the last game which brought a total of 227 points.

Prediction: The Pelicans have won three in a row and beat the Rockets away from home. Now, they have the home-court advantage and their confidence will be buoyed after they had the Rockets on the ropes in the second half away from home. I think Ingram, Valanciunas, and Jones will combine for 70 points or so here. I believe the Pelicans will take this game 121:106.