New Orleans vs Phoenix: the Visiting Team Will Play Without Booker 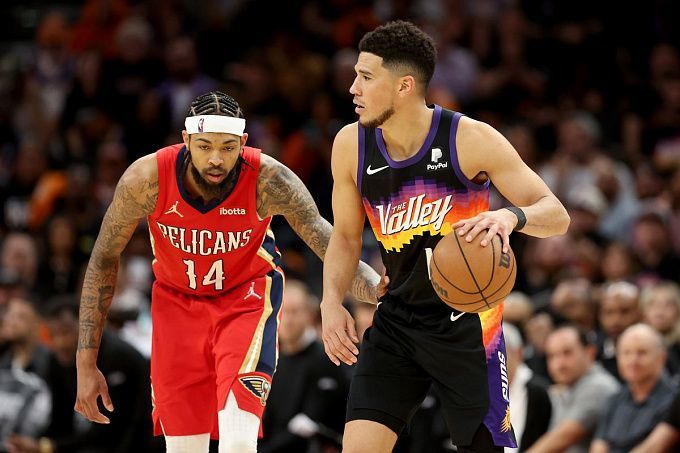 New Orleans unexpectedly got a good chance in the series with the Western Conference winner, Phoenix. The odds on the Pelicans winning the third game have dropped dramatically - should we follow the crowd and bet on the home team?

The very fact that New Orleans is in the playoffs for the first time in four years is enough to make fans happy. Hardly anyone expected the team to take at least one game against Phoenix. C.J. McCollum is known for his vulnerability on defense, the Pelicans' already weak bench is impoverished beyond belief after the trade, and Zion Williamson is still not ready to join. Even Devonte Graham, who was hired on a decent contract in the offseason, is slowly falling out of the rotation, but despite that after two road games the score in the series with the Suns is tied.

The day before, Willie Green's team defeated Phoenix by a score of 125-114. C.J. McCollum made 6 threes and Brandon Ingram had one of the best games of his career with 37 points. The others also helped a lot as Herbert Jones and Larry Nance, Jr. combined for 11 of 17 shots from the floor. New Orleans finished with far fewer points against the opponent's defense compared to the 1st game, scoring 125 points on 84 possessions.

The Suns have rarely played with their optimal lineup, and already at the start of the playoffs they were unable to save Devin Booker from injury. One of the club's leaders will miss at least 2 weeks, so Phoenix will have to rebuild their offensive game somehow. Chris Paul has taken more of a lead in the playoffs, and now he could shoulder an even heavier burden. Cameron Johnson, who put in some nice performances during the regular season, should not be discarded, as well as DeAndre Ayton. The injured Dario Saric is still out and is unlikely to return to the floor this season.

Devin Booker scored 31 points in the 2nd game against New Orleans before he was injured. Chris Paul made only 5 of 16 shots from the field, and the shooters were not happy at all. Johnson and Crowder combined for just one shot on 11 attempts from beyond the arc, and the Suns shot just 3 of 14 from beyond the arc in the 2nd half. Ayton wasn't very noticeable, and even JaVale McGee scored as many points as the young Bahamian, even though he spent less time on the floor.

New Orleans' defense is not impenetrable, with gaps in the paint and on the arc. The home team's coach is trying to at least shut down the perimeter with Jose Alvarado, but too much depends on Ingram and McCollum on the offense. Phoenix still has one of the best playmakers in the league, shooters need to step up, and it's time for DeAndre Ayton to wake up. Booker's injury is a big loss, but it's not critical for a system team that plays defense.