New York Knicks vs Atlanta Hawks Prediction: Is it worth betting on high-scoring basketball? 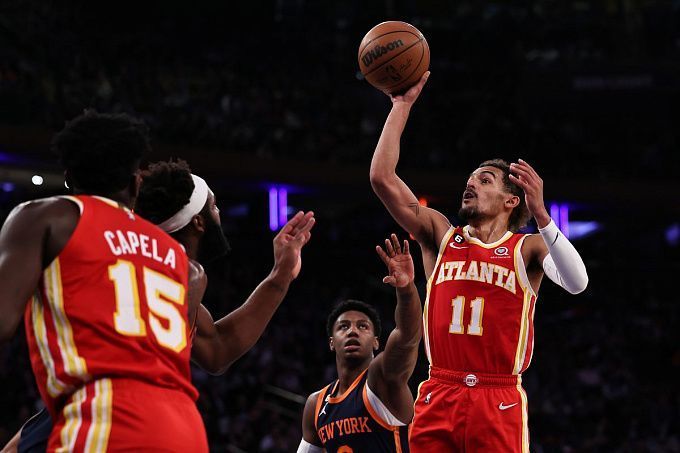 Before the match between the Hawks and Knicks bookmakers set a very high total, although recent head-to-head meetings between the teams were much less spectacular. Should we go against all the statistical trends and bet on a high-scoring basketball game?

The Knicks' current roster is good enough to compete for a playoff spot, and they need to add at least one star or near-star player to their roster to solve more significant problems. Julius Randle has improved over the last regular season. He's currently New York's most productive player. Jalen Brunson is slightly behind, and R.J. Barrett is far less effective than the club's top duo.

The team is now 9th in the East, with only two wins in 6 games. Last night the Knicks unexpectedly beat Cleveland (92:81). The coach significantly cut the rotation that night, as Cameron Reddish, Evan Fournier, and Derrick Rose were absent. At the same time, Quentin Grimes spent the most time on the floor. Grimes is likely to be a key contributor on defense for New York, although he has been unstable on offense. Against the Cavaliers, two players with relatively few field-goal attempts made over 50% of their shots on the day - Immanuel Quickley and Mitchell Robinson. Jalen Brunson was the highest scorer on the team, with 23 points.

The Hawks are still in the top 6 of the Eastern Conference, but things could change for the better if they keep this up. Atlanta has only four wins in their ten previous games while losing to two clubs that are not playoff contenders, Houston and Oklahoma. The Hawks are missing Deandre Hunter and John Collins, both of whom will not play against New York due to injuries. Newcomer Bogdan Bogdanovic has yet to find his form, but rookie A.J. Griffin has looked good, getting a lot more playing time. Over the last two weeks, Griffin has scored 12 points per game, trailing only Clint Capela, Trae Young, and Dejonte Murray.

The squad lost 114:121 against Oklahoma State. Griffin had a poor game, and Murray's effort from 24 points was inadequate. Bogdanovic had a decent showing with five three-pointers, while Jarrett Culver and Onyeka Okongwu, who came off the bench, also shined.

Both teams play at a very fast pace. They rank in the top 6 in the NBA in average shots per 100 possessions. Not surprisingly, bookmakers are giving a very high total, and the main reason is the change in the Knicks' game. With time, everything may turn upside down again, as Tom Thibodeau has begun the rotation and emphasized defense. It worked against Cleveland, but the Cavaliers aren't in great shape now. The Hawks and Knicks can complete offensive plays more efficiently, and the odds of winning are about the same.