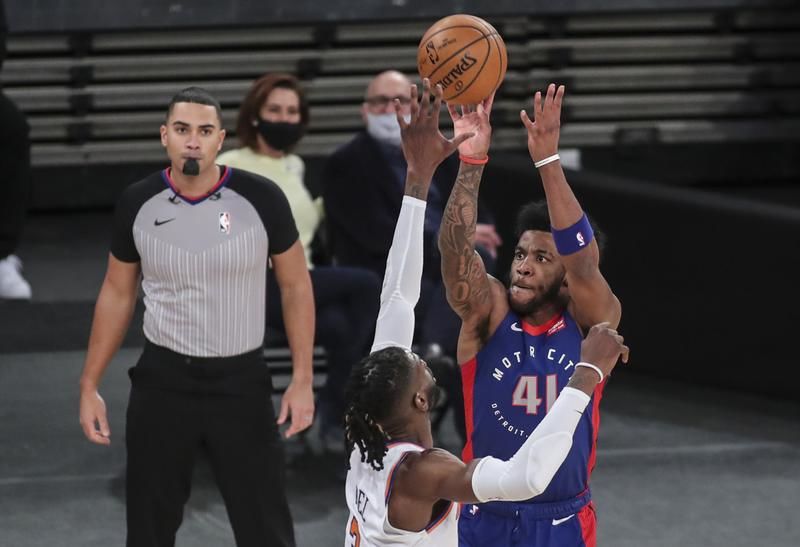 As COVID-19 keeps a large number of players at bay, teams have received flexibility to sign players on ten-day deals to keep the roster length afloat. Anyway, with some absentees and a lingering sense of insecurity regarding a COVID-19 outbreak, the job to predict games and evaluate outcomes becomes tricky. Still, tipsters will suggest, bettors will bet, and bookmakers will release odds. So, in this game, the New York Knicks welcome the Detroit Pistons in a classic Eastern Conference battle. The Knicks are four games behind the 50% win mark while the Pistons won after more than a month against the Heat and are 19 games under the 50% win mark! Jump to the “Notes” for a quick snoop. For the “total and game result” prediction, skip to the “Expert Betting Tips” section.

Knicks plagued by inconsistencies: Knicks have five key rotation players in the COVID-19 protocols, Kevin Knox II is also out while Derrick Rose is a “Game Time Decision”. With such a long list of absentees, you can see how New York is running short. However, the team wasn’t accomplishing much even with a healthy roster. New York haven’t won two games in a row since the last day of October and have lost more than two in a row a bunch of times. New York is not accustomed to winning and despite having experience and a bunch of scorers, the team has failed on the offensive end time and time again.

Pistons finally won: Pistons beat the Heat 100:90 in the last game and that victory was their first in more than four weeks. It wasn’t like they were winning all that much with their offensive ace Jerami Grant but once he went down, the team took a further hit. One positive(if any) for the Pistons has been the form of Saddiq Bey who has cast aside his inconsistent scoring for a while and has compiled three 20+ points nights for the first time in the season. Detroit has some fascinating young players but that inexperience itself is the reason why Detroit is losing so much.

Offensive Comparisons: Both teams have been hit by massive offensive inconsistencies. Knicks have had some games with 120+ points here and there but largely they have been confined to a 99-102 points range and with such a depleted roster, the generation of offense can become trickier. Still, the team inserted Kemba Walker back into the lineup and he delivered straight away. If Fournier replicates his last game’s performance versus Celtics as he scored 32 points.

Pistons have mostly scored in the 93-103 points range this season and with Grant out, they have found some spark in Cunningham but it is Saddiq Bey who has done the damage recently. Cunningham has been a terrific ball distributor throughout the season and he looks like a sturdy all-around player for the future. Killian Hayes has significantly improved his play and has clocked some double-digit games while Isaiah Stewart has continued to pount huge numbers of boards. That is why in some of the games recently, the Pistons have gone past 110 but that is not a norm.

Points Range: The Pistons defense was tight against the Heat but I doubt if they can put together two strong defensive games in a row. I think if the Knicks have Randle, Fournier, Walker, and Burks, they can still field a substantial offensive team. There are three-four players who can score in the excess of 20 points. The Pistons have found some lovely touch in Saddiq Bey plus Cunningham can get the offense going due to his playmaking abilities. I think the Pistons can get relegated to 97-104 points while the Knicks can get past 105 points. I think the total points range here is 204-215.

Prediction: You’d think record-wise Knicks have an overwhelming advantage over the Pistons but still, with the way the Knicks are playing, you can’t trust them too much. Pistons may have some confidence considering how they beat a feisty Heat. I “feel” that the Knicks will win here with a score line of something like 118:101.