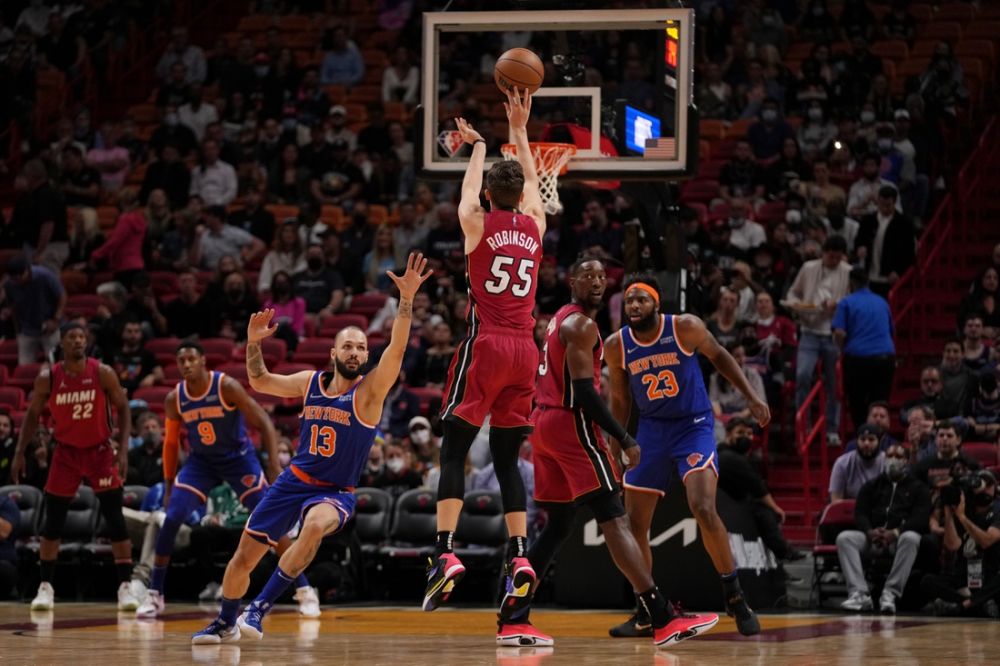 NBA is a wild ride and the long season means a lot of varied results and production. As the postseason comes tapping at the door, the wild push towards the Playoffs will only become more and more intense. The Eastern Conference has seen some squads rise this season and the battle for the top spot remains wide open but yes, the Chicago Bulls are surely creating a more than a decent distance from others at the top of the table in the East. And as the East gets more interesting, the inter-conference battle between the New York Knicks and the Miami Heat holds a lot of weight.

The Knicks are having a troublesome season with 25 wins and 34 losses, currently on a three-game losing streak, and have lost seven out of the last eight games, including three straight losses at home. The team keeps on falling further with each month and their road to the Play-in spots has only become more tenuous with each day. With Kemba Walker shut down for the rest of the season, how will the Knicks figure out their guard rotations?

On the other hand, the Miami Heat keeps on solidifying their claim to top-two spots in the Eastern Conference. The squad has notched 38 wins and 21 losses, having won six of the last seven games. The team’s incredible depth has been the primary reason for their incredible record and with the Bulls at the top, the Heat’s sights will be to clinch the East. They will play a long home stretch in the upcoming window so yes, it will not be a surprise if Buttler and co. continues their current ways. But first, can they take care of business versus the Knicks? For my game total and result prediction, go to “Expert Betting Tips”. For my player-based statistics prediction, go to “Player Performance Prediction”.

Knicks will need a big run, Heat is in a much better position

The Knicks are shutting down Kemba Walker for the rest of the season, and frankly, that is a great mutual decision. Kemba hadn’t fit in the New York team and his numbers have been down across the boards. And since Derrick Rose has been injured, the one-guard position has been in tatters for the New York squad. The Knicks have been suffering a lot ever since the mid-January period, being among the bottom-five squads record-wise if we take into account the last five weeks or so. The Knicks didn’t make any moves during the trade deadline but with the way things are going, they are going to have a busy offseason.

One issue with the Knicks has been their lack of efficiency and Alec Burks has been especially off from the field, further hurting the guard position. Evan Fournier has had his moments but he hasn’t done enough consistency-wise. The Knicks have lost all steam since off-guard RJ Barrett has been injured but even he has had his own shooting troubles. Julius Randle is the primary scorer, playmaker, and rebounder while giving physicality on both ends but his numbers are down across the boards. Perhaps, Mitchell Robinson has been the most impressive player in the last few weeks while Immanuel Quickley has followed the theme of inefficiency. Quinten Grimes can get a ton of minutes with Kemba shut down.

Heat primed for a big finish

The Miami Heat has just one fewer win than the Bulls, and the Bulls have been on a six-game winning streak as DeRozan has been playing around with defenses. The Heat has also played around with opponents on both ends of the floor and there is no doubt that they are among the deepest teams in the league with a type of team balance that will make the rest of the league envious. The Heat will play 15 of their next 23 games at home and they can reap a lot of benefit in that window. This is what makes the Heat’s current record impressive, they have been doing well both at home and away from home.

The team has amazing individual defenders and hustle players in Lowry, Robinson, Buttler, Tucker, and Adebayo, all of whom can switch to the perimeter, play great one-on-one defense and also communicate well. The bench has been a great presence for the Heat with Herro leading in scoring and Strus, Vincent, Dedmon, Yurtseven, and Martin doing a great job whenever their number is called. The Heat has multiple playmakers, shot creators, and overall, their scoring balance is a thing of beauty more often than not. The Heat’s admirable balance on both ends surely makes them a title contender.

Points Range: The Heat has scored mostly in the 110-115 points range during the recent times. And with their defense, the squad has limited teams to 100 or fewer points on a regular basis. On the other hand, the Knicks have scored mostly in the 105-108 points these days but their defense has given up 110+ regularly. The team depth and efficiency indicate a contrast in terms of scoring and the Heat has a definitive edge in terms of bench scoring than the Knicks. I see Heat scoring at least 106 here while the Knicks being checked below that mark. I think the total points range here is 210-220.

Prediction: As stated above, both depth and efficiency wise, the Heat hold significant edge over the Knicks. Miami has won five in a row away from home and that is what makes the team’s season special, i.e. the ability to win on the road. On the other hand, the Knicks have lost three in a row at their home floor and they have been unable to build momentum so far this season. This is why I see the Heat winning this 114:105.