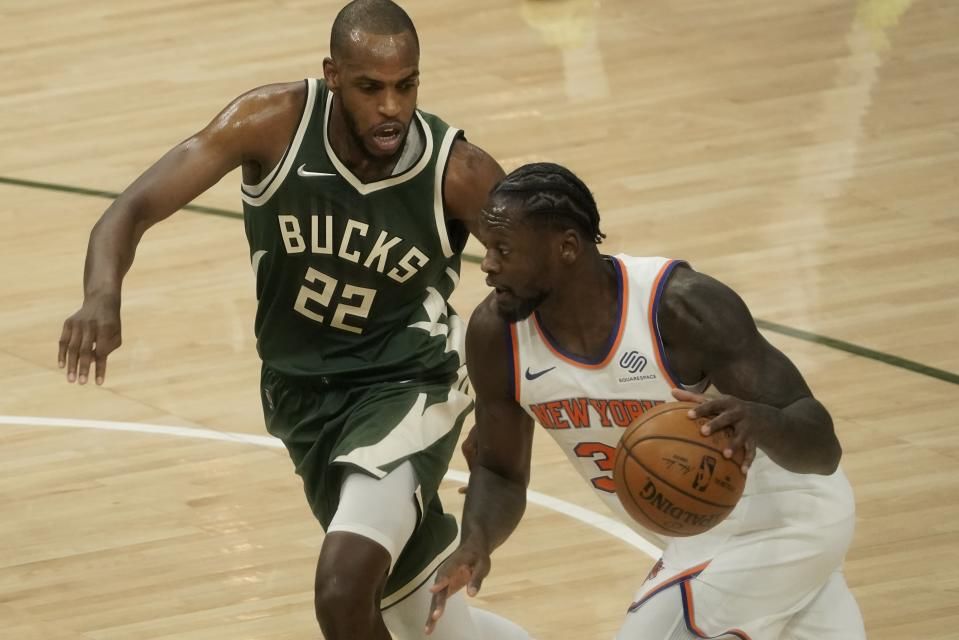 NBA betting is a tricky practice as it is an 82-game long season for each of the thirty teams and the pandemic scenario changes the roster picture game in and game out. So, you never know if you can end up missing most of your starters some nights. Anyway, let us jump right into it. In this game, the New York Knicks host the Milwaukee Bucks. New York is two games under the 50% win mark and has lost five of its last six match-ups while Bucks are seven games above the mark and have been on fire for more than a couple of weeks. Can the Knicks put their struggles behind them? For a quick look, go through “Notes”. For “Total” prediction, go to “Expert Betting Tips”.

Bucks options: Bucks have at least five players who can score around 15 points. Three of them in Holiday, Antetokounmpo, and Middleton, constantly go over the 20 points mark, while Portis hovers in the 15-20 points and Connaughton in the 10-16 points range. Some of the Bucks bench players can start for many NBA teams and remember, this scoring power is at their disposal without their two starters in DiVincenzo and Lopez. The Bucks are deep offensively and they have a bunch of experienced players who can build big leads. Milwaukee has constantly scored in the 112-125 points range since Mid-November.

Knicks’ lack of options: New York has mounted a highly uninspiring and demotivating campaign this season. Somehow, the team keeps getting worse and one of the major reasons for that is the lack of scoring options. Randle’s production is down, Fournier has not come across, Barrett has struggled to shoot, Kemba isn’t even in the rotation anymore, Rose isn’t the same as last season, Robinson has rather regressed on offense, Alec Burks is inconsistent, Immanuel Quickley is not firing, Obi Toppin has given slight hope, and overall, the Knicks offense is a mess right now. Randle, Barrett, Rose, Fournier have seen a fall in their shooting percentage as well as scoring range constantly this season. This is the reason why the Knicks are not comfortable in 110+ points scenarios.

Match-ups: Assuming most of the players play in the game, the match-up highlight belongs to the Forward battle between Julius Randle and Giannis Antetokounmmpo. Both are all-around players but Giannis is scoring 5-10 points more than Julius on average. Khris Middleton, Grayson Allen and Jrue Holiday on average have an edge over RJ Barrett, Alec Burks, and Evan Fournier. Meanwhile, the Center edge belongs to Bucks as well, with Portis being a way more high-yielding player than either of Noel or Robinson. In terms of bench, the Knicks have Quickley and Toppin in a guard-heavy rotation, who can have an edge over Pat Coonaughton, but Bucks balance it out through heavyweight main five.

Overall: The edge belongs to the Milwaukee Bucks in many spheres. They are both a better offensive and defensive team right now, plus they have more in-form players. Knicks are heading into a dangerous territory where they can start losing multiple games by 10 points or more. Yes, things have gotten that alarming for the Knicks. As of now, the Bucks hold the cards and are way more loaded than the Knicks.

Points Range: With the Knicks, we don’t know how they will play or if they can even reach 100. With this Bucks team, a 105 points night is expected at least and it is an exception when they are restricted below that. I think the Knicks defense will suffer further if they don’t figure out how to run the offense and here I think the Bucks have a chance of scooping up 110 points or so. I believe the Knicks offense will struggle once against the Bucks and they will score in the 95-103 points range while Bucks will lodge 110-120 points. Total Points Range for me is 205-223.

Prediction: I select the Bucks to win this match unless there are major pre-game absentees. In fact, I’d argue that the Bucks are going to blow out the Knicks. The team is struggling right now and an experienced unit like Bucks knows how to take advantage of struggling teams. I am opting for the Bucks to win here with a score of 113:98.