Oklahoma City Thunder vs New York Knicks: Can Knicks guard fire in this one? 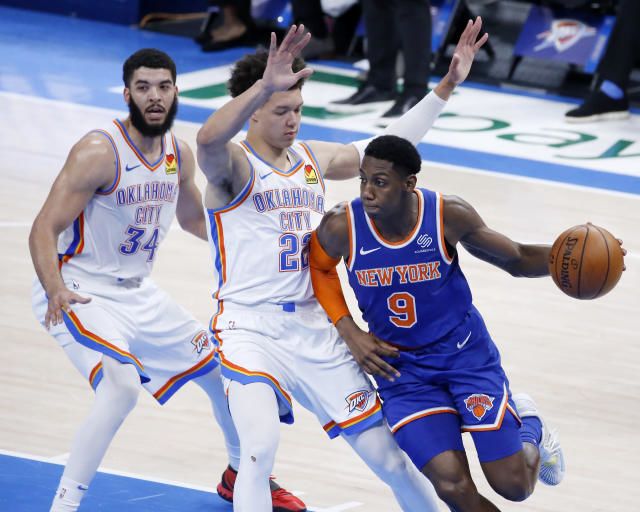 Now that the COVID-19 wave has ensured that the “COVID-19 protocols” are the way going forward and there is not much we can do about it, the league will have to try something new to ensure a more smooth sailing. Still, till the league keeps churning the games, writers will write, readers will read, and bookmakers will keep releasing odds. And here we are again, discussing the battle between Oklahoma City Thunder and New York Knicks, two teams who are no stranger to the COVID-19 threat like most of the teams in the league. The Thunder were playing well before the pandemic touched their threshold while the Knicks took advantage of the situation and have beaten some short-handed squads after having trouble piling up wins. Can the guard-heavy lineup of Knicks finally click in tandem during this game where the team is missing their ace Julius Randle. For my total and game result prediction, jump to “Expert Betting Tips”.

Thunder can fight: Josh Giddey was a huge factor for the Thunder before his absence due to the COVID-19 protocols. He is an energy bunny who leads the team in rebounds and assists plus he also upped his scoring this month. Now, with Shai Gilgeous-Alexander questionable for this game and Josh Giddey out, Thunder can have their hands full here. Luguentz Dort, the wing has shot poorly and that has made matters worse with the defense already hurt so much. The Thunder was doing well before the COVID-19 wave hit them but then almost all of the league is suffering like them. What will this mean for the development of young players like Giddey? At any rate, if Shai Gilgeous-Alexander plays here then the Thunder will have someone who can be effective regularly on offense.

Knicks’ woes: Knicks have had almost all players struggle shooting-wise. It is appalling how so many players at the same time can get cold at the same time. And one other interesting observation, guards Fourneir, Burke, and Walker, who are experienced, have scored 30+ one game and then have gone down to less than 10 points scoring in the next game. On the other hand, RJ Barrett’s shooting troubles are a matter of concern, the youngster has shot below 40% in most of the games this season and that is a huge reason why the Knicks have been inefficient too. What is there that the team can do to better the scoring? Someone like Immanuel Quickley or Obi Toppin will need to step up the game if anything. In the current scenario, the role of bench players has become even more crucial.

Points Range: Now, with the Thunder’s defense these days, a high score is possible, remember more than anything, the unit right now hasn’t played together a lot and there can be a lot of miscommunication in these cases. On the other hand, it isn’t like that the Knicks are some elite defensive squad but they have done a decent job at making sure that the short-handed teams don’t begin hot against them, hence, their last two games have been low-scoring. But yes, with Julius Randle out, the defense can take a little bit of a hit, making Mitchell Robinson’s role as the last line of defense even more prominent. If Shai doesn’t play then the Thunder team can have trouble getting close to 105 or so and Dort will need to apply himself better. For the Knicks, it isn’t like their offense is smooth, but I see them getting past 101 after not doing so in the last three games. I believe the points range here is 201-210.

Prediction: In the pandemic era, you never know what type of game any team will bring. If Shai plays for the Thunder, their chances take a significant uptick. Aaron Wiggins and Ty Jerome have returned some promising performances but Dort has to do a better job shooting the ball. On the other hand for the Knicks, this is a great opportunity for the guard-heavy lineup to move the ball around, get in isolation situations and use their one-on-one skills turn by turn. I believe with veteran guards like Burks, Fournier, and Walker, the Knicks should have done much better but for me the bigger concern is the form of Barrett, who is due a big game for a long time. I think if Shai plays then the Knicks have a 52% chance against the Thunder, if he doesn’t then they have a 67% chance of winning. Eventually, I think they will scrap one out 104:98.